In the Heritage of Pastinha, Mestre Pastinha is quoted saying, “No one can define it… Capoeira is full of malícia, it is art and skill, it has the potential for everything that is thought to be good in life” (2.2.34). Mestre Decânio emphasizes Pastinha’s statement to explain how “the multiple aspects of capoeira manifest themselves according to the context.” For example, “in art it is choreography” and “in battle it is a martial art," which is how I believe most people today would describe capoeira. In my experience, I define capoeira as a journey, and it does truly manifest differently depending on my life context.

My formal introduction to capoeira was three and a half years ago. It began in the events room of a beach side hotel overlooking the Atlantic Ocean from an island off the coast of south Brazil. The island, Florianópolis, I would call home for the next year. O Grupo Capoeira Fortaleza da Ilha spread out throughout the room and paired the 30 some recent high school graduate gringos (foreigners) together and taught us ginga, esquiva, rolê, meia lua, and rabo de arraia (capoeira moves). It was insanely difficult keeping the moves straight. The mestre (master) called us to a roda (circle), pulled out a full bateria (percussion group), and called our Brazilian program leader, Yuri, to play against his top student. We watched in fascination and “sang” along. I remember thinking that they must have practiced beforehand; the choreography was seamless. After the session, a bunch of us went to the beach to practice capoeira, but ended up horsing around and pushing each other into the ocean.

Foi na beira do mar, (It was at the seashore)

aprendi a jogar (I learned to play)

na beira do mar.  (At the seashore)

These lyrics to a song we sing in the roda resonate with me, but I wish they were more my truth. I was introduced to capoeira on the seashore, but I let my fear hold me back from pursuing capoeira in Brazil. To a gringa, capoeira meant intimidation of “the other."

While I was in Brazil, I made the decision to attend Oberlin, though I was uncertain that it was the right choice. However, once I saw the Oberlin Capoeira Angola (OCA) video on the class Facebook group, I realized that Oberlin might be the best place for me to maintain my connection to Brazil — really, to connect me where I had been too scared to connect before. Since my first year, I am so fortunate to have found belonging in such a welcoming community of OCA, even though I would often let other commitments pull me away from capoeira — music ensembles, science labs, extra hours at work, and, of course, homework. However, like Mestre Curió, “... I learned, in colleagues’ rodas, how we are all angoleiro brothers and sisters in a big angoleiro family!” (49). As a lost first-year, I was extremely grateful to Deron, Miyah, and Socrates for creating a space for those of us who were new to Oberlin, capoeira, and/or each other to easily allow ourselves to be vulnerable and closer to one another. The moves were difficult, and I was still too intimidated to participate in rodas, but it felt right to be there, even when it was hard to find my place elsewhere in Oberlin. When I was lost and alone, capoeira meant belonging.

My second semester, capoeira became my workout. Like Pastinha, I “recognized capoeira as a way to maintain physical fitness and rejuvenate the body” (1.2.4). After a terrible break-up, I had an intense desire to work out and committed myself to having a better body and soul. Capoeira helped with my stress and emotions, and I felt more connected to the art. I loved the intensives, and slowly gained courage to participate in rodas, though I was still very intimidated.

During this time, I was interested in the technical details, though physically I was mostly unable to do them. I remember, after countless weeks of trial and error, I was finally able to do a handstand against the wall. I screamed with joy — and immediately fell over. I was overwhelmed with my new achievement, and the others clapped, proud of me as well, and it felt so good. As a workout, capoeira means testing your physical limits and breaking them.

First semester, second year, I did not do my duty. According to Pastinha, “one’s duty is to be honest with oneself, it is to respect oneself, it is to act with clear awareness” (2.2.56). I went through the semester in a haze, focusing on different obligations and relationships that were not healthy for me in the long run. I was unable to take Capoeira Angola I, which disheartened me, but I even kept myself too occupied to attend OCA meetings. I felt that I was spiraling downward, and I wasn’t aware enough of myself and my needs. I remember getting a text from Ava, reminding me that I could always confide in them if I needed support and to come back to capoeira since they knew how healing playing capoeira can be. I played on the occasion with Zoe out in Hark Bowl and attended the capoeira weekend intensive, where alums came back to train us, and finally realized how much I needed capoeira. I realized I had to enroll in Capoeira Angola II to commit myself back to the art, and Decânio’s interpretation of the quote, “the fulfillment of duty makes up part of the fundamental necessities of the personality, indispensable to well-being, to happiness” resonates so strongly with me now. Capoeira means my duty.

Reflecting on my semester in Capoeira Angola II , I really felt Curió’s quote: “When we enter the capoeira roda, our composure changes, our strategies for playing capoeira become diverse; ...everybody has an animal that they identify with in their movements; that way, there is no single pattern nor is there only one form of play for Capoeira Angola” (47). Through our sequences and movement practices, I can tell that I am diversifying my capoeira playbook. Through the readings and interactions with other students, I began to clearly see the diversity in capoeira: the diversity that brings people to capoeira and the diversity in skill, style, and thought. Capoeira means diversity in all these things and more.

Looking to the future of my capoeira journey, I am more committed to diving deeper than ever. I know it’s a bit early in my capoeira career to be giving myself a name, but I am striving to become Beija Flor. As Curió says, many mestres and players are named after the animals they embody in their movements, and I hope to become a hummingbird.

When I was in Brazil, the little birds became incredibly important to me since they would fly by at very formative moments — when I first connected with my host grandma about homesickness, when I realized the complicated nature of being mixed race, when I travelled alone around São Paulo and Rio de Janeiro. Hummingbirds mean changing pace, adapting to new challenges, letting go of the past to become light and embrace the future. I have a long way to go to become Mestra Beija Flor, but it’s a goal to strive for, to stay light on my feet, flit around the game, adapting to whoever I’m playing against and changing pace accordingly, as a hummingbird would. Capoeira means becoming, and the journey it takes to get there.

Capoeira Angola I and II are taught by Prof. Justin Emeka '95 and are cross-listed in the Africana Studies and Dance Departments. 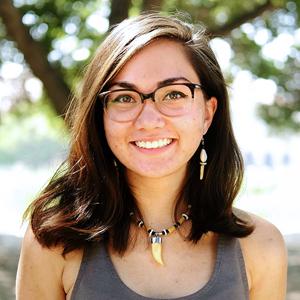