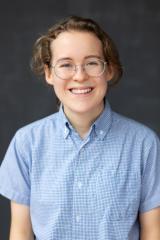 Katie Frevert (she/her) is a Russian and East European Studies; Creative Writing major conducting mentored research under Professor Vladimir Ivantsov. Her project is titled "Kill the State in Yourself": The Totalitarianisms of Egor Letov".

The Siberian punk movement of the 1980s is often regarded as Russia’s most genuine rock underground. Amidst the numerous politically and aesthetically daring bands the scene produced, none has matched the notoriety of Grazhdanskaia Oborona (Civil Defense) and its leader Egor Letov. At first glance, Letov seems to bear the hallmarks of a quintessential perestroika-era dissident: clashes with the KGB, months spent on the run after scandalous concerts, and songs declaring disdain and open hatred for Soviet power and “totalitarianism” in general. However, ordinary listeners and academics alike have found it difficult to reconcile Letov’s early rancor towards the Soviet government with his ardent communist sympathies and extremist tendencies following the USSR’s collapse, making it difficult to place him in the ranks of Soviet dissidents. By analyzing his musical output in the mid-to late-1980s, I argue that Letov manipulated existing ideas of totalitarianism in reference to the state in order to demonstrate a deeper existential rebellion against “totalitarianism in all its manifestations” in human society – one that subverts typical understandings of what rebellion in the late Soviet era mean

A brief summary (the elevator speech) of your research project:

Egor Letov, the leader of the Siberian punk movement of the 1980s, has long been a controversial figure due to his political beliefs, many of which do not easily fit the paradigm of the dissident struggling against the Soviet state. While many of his songs reference the idea of totalitarianism – an epithet long applied to the Soviet Union – Letov claimed to use his criticism of the Soviet regime to symbolize a more complex existential rebellion. By analyzing the songs of his primary musical project, the band Grazhdanskaia Oborona (Civil Defense), I hope to decipher what totalitarianism meant to Letov and in the process provide a new perspective on Soviet-era political defiance.

Why is your research important?

Egor Letov’s political convictions in the 1980s are often presented in straightforward terms of contempt toward the Soviet regime, and although this is perhaps unsurprising given his status as Russia’s most iconic punk rocker, I believe this fact also reveals a broader pattern – particularly in academia – of oversimplifying what political defiance looked like in the Soviet Union. By presenting Letov as a theorist in his own right who illustrated his political and existential ideas in his music, I attempt to challenge this tendency to fit all Soviet-era nonconformists into the framework of “dissidents” for whom rebellion meant simply reacting against an oppressive state. In doing so, I hope to provide both an explanation for Grazhdanskaia Oborona’s enduring appeal and an alternative vision of political opposition both in the Soviet Union and in the present day.

What does the process of doing your research look like?

Although I only began my honors project at the beginning of fall 2021, in some sense, I have been gathering information for my research for years due to my long-held fascination with the Siberian punk underground – I first heard of Egor Letov in summer 2019 and have been hooked ever since. One of my personal goals while at home during the first months of the pandemic was to listen to the entire discography of Grazhdanskaia Oborona, which has proved invaluable as I select songs to analyze in my thesis. Coupling this knowledge of Siberian punk with context on the idea of totalitarianism as it relates to the Soviet Union has also allowed me to make connections with historiography, a field I was first introduced to while taking a course on Stalinism, and I have enjoyed making these interdisciplinary connections.

In what ways have you showcased your research?

Since I began my research as an honors project in fall 2021, my work is still in its early stages, so I have not yet had the opportunity to present on it. However, I hope to take part in the upcoming Oberlin College Undergraduate Research Symposium, and in the spring, I hope to make my thesis defense open to observers to share my work with a wider audience and to demonstrate to younger students the many directions that research in the Russian department can take. On a more informal basis, I have a radio show on WOBC-FM focusing on punk, avant-garde, and underground music in Russia and the Soviet Union (Russian Field of Experiments with DJ Katya, naturally named after a Grazhdanskaia Oborona song), which provides me with a venue to explain the history of the music I analyze in my research for an English-speaking audience.

How did you get involved in research?

In fall 2020, I attended a guest lecture over Zoom supervised by my now-mentor, Vladimir Ivantsov, where he mentioned offhand that his doctoral thesis involved the Siberian punk scene of the 1980s, which even at that point had fascinated me for months, and had focused in part on my favorite band, Grazhdanskaia Oborona. Understandably, I was thrilled, after the lecture, I sent him an email telling him about my radio show – for the first time, I realized my dream of an honors thesis on Grazhdanskaia Oborona might be feasible, and I remember privately hoping that he would be able to advise my research. In a sense, writing an honors thesis on Egor Letov is my academic dream come true.

What is your favorite aspect of the research process?

While I enjoy the opportunity to analyze the music that has captivated me for years in an academic context, my favorite part of my research is the simple fact that I am writing an honors thesis on a punk rock band, something that I would have never thought possible before coming to Oberlin. On my weekly radio show, I often take the opportunity to tell my listeners about my work – it’s been so rewarding to combine my extracurricular interests, the music I love, and serious academic study.

How has working with your mentor impacted the development of your research project? How has it impacted you as a researcher?

Professor Ivantsov has provided me with valuable guidance throughout my research progress and helped me develop my vague desire to undertake an honors project on Egor Letov into a more focused thesis. Most of all, I feel incredibly fortunate to work with Professor Ivantsov given his academic background on the Siberian punk underground – not so long ago, I would have never thought I would be able to find a research advisor who shares my interest, much less one who can offer his own expertise on the subject. It’s always a wonderful feeling to be able to quote a song or reference an interview knowing that he will understand, and I feel honored when he does the same with me

How has the research you’ve conducted contributed to your professional or academic development?

My research provides me with the opportunity to synthesize my existing interests and areas of knowledge – Russian language, Siberian punk rock, Soviet history – into the “final product” of a 40-to-80-page honors thesis. Formulating a hypothesis, structuring my argument, and close-reading texts have been a fascinating window into the process behind writing an academic text, and the deeper I get, the more possible directions I find, which leads me to contemplate carrying out further study on the works of Egor Letov.

What advice would you give to a younger student wanting to get involved in research in your field?

Reach out to professors whose work interests you or whose areas of study line up with yours! Also, if you have a passion for a particular subject that might not seem “serious” academically, don’t dismiss it – the fact that I’m writing my honors thesis on a Soviet punk band is a testament to the fact that research can be whatever you make of it.