Raavi Asdar’s Critical Language Scholarship not only helped him explore his own sense of self but exposed him to other cultures, all of which play a key factor as he ponders a career abroad after graduation.

The Critical Language Scholarship (CLS) Program grants students the opportunity to spend eight to ten weeks studying one of 15 critical languages. The program includes intensive language instruction and structured cultural enrichment experiences designed to promote rapid language gains. CLS winners traditionally study abroad in the summer, however, because of the pandemic, the program will take place online. CLS, a U.S. Department of State program is part of an initiative to expand the number of Americans studying and mastering world languages that are critical to national security and economic prosperity.

Asdar, a third year history major with minors in Russian and Eastern European Studies and Middle East and North African Studies, is fluent in Urdu.

Although Urdu was spoken in Asdar’s home in Austin, Texas, he and his brother would respond to their parents in English.

However, as Asdar grew older, he began to feel as if he was denied a part of his identity and "resented not being taught how to speak, read, or write Urdu. [After leaving home], that resentment transformed into a sense of responsibility to learn Urdu for myself,” he says. “I sought out the CLS Urdu program as a way to learn my parents' mother tongue and gain a firmer sense of my own identity.”

Asdar was awarded the CLS to Lucknow, the capital city of the Indian state of Uttar Pradesh, last year and engaged in a virtual experience this past fall. Although the pandemic prevented travel, Asdar says his language skills grew during the program, thanks to CLS professors and staff who worked hard to create an intensive language environment.

“I felt like I got to know my professors and peers pretty well. There was a certain intimacy gained by using Zoom—sometimes we would see our professor's children in the background or the pets of some of our peers,” he says. “In addition, we were each paired with a language partner who was from Lucknow and usually closer to us in age. We would spend at least a couple hours a week having one-on-one conversations with our partners.”

As Asdar concludes his junior year at Oberlin College, he is confident that the language skills he built will continue to serve him in a variety of ways.

“I hope wherever I end up [after Oberlin], I can work towards creating a more equitable world in my community,” he says. “I also want to add as a final note, if anyone is thinking of applying for CLS please feel free to reach out and use me as a resource.”

Asdar is the recipient of a 2020 Humanity in Action Fellowship to Amsterdam and a member of several clubs and organizations on campus, including the Muslim Student Association, the Oberlin Student Cooperative Association, Bike Coop, Pottery Coop, and Barefoot Dialogues. He cofounded the Maple Syrup Ecological Learning Center.

Drummer has performed with a long list of jazz greats across a career spanning seven decades.

Zoe Guiney, a Hispanic studies and cinema studies major, graduated from Oberlin College with high honors in May. Her educational journey will continue in Mexico as a Fulbright recipient.

While on a Teaching Assistant Program in France Fellowship, Jules Taylor ’21 hopes to learn who she is as an educator, while absorbing everything she can about the culture, language, and food of Paris. 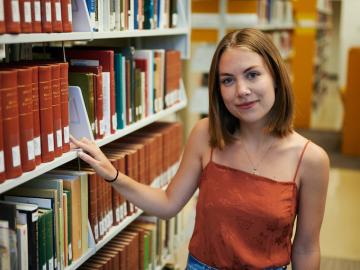