Founder and director emeritus of OBSVAC 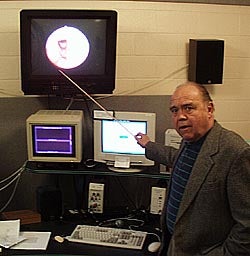 Richard Miller’s rich performance career has been distinguished by diversity in opera (some 50 roles in more than 450 performances), oratorio and recital, in Europe and America. He is known internationally for master classes in systematic vocal technique and artistic interpretation presented in 38 states of the U.S., in Europe, Australia, Canada, and New Zealand. Research and teaching projects have been undertaken in 14 European countries. He continues as an active researcher and author in voice technique and performance.

He holds a BMus and a MMus from University of Michigan, an Artist Diploma from L’Accademia di Santa Cecilia, Rome, and a LHD from Gustavus Adolphus College. He also was a 1952 Fulbright Scholar.

In May, 1990, he was decorated Chevalier/Officier into the French Order of Arts and Letters at the hand of Madame Regine Crespin ‘‘in recognition of contributions to the art of vocalism in France and throughout the world.’’

In 2006, Miller received the Voice Education Research Awareness Award from the Voice Foundation for his contribution to the field of voice communication. He was chief presenter at several international voice congresses.

Miller served as adjunct staff member, otolaryngology department of Cleveland Clinic Foundation, associate of Collegium Medicorum Theatri, and was a member of the American Academy of Teachers of Singing.

He has contributed more than 100 articles on voice pedagogy, research, and performance artistry to professional journals, including Journal of Voice, Folia Phoniatrica, Choral Journal, American Music Teacher, Vocal Arts Medicine, Journal of Research in Singing and Applied Vocal Pedagogy, and Journal of Singing.

He is the author of many standard books on voice pedagogy and performance, including:

Engaged by the French Ministry of Culture as an expert pedagogic consultant in 1983, he offered courses in voice pedagogy for teachers and students of the French national conservatory system, presented lectures and classes at the Paris Conservatoire Superieure, at the Marseilles National Opera School, and at Centre Polyphonique.

Miller served as Wheeler Professor of Music Performance at the Oberlin Conservatory of Music from 1964-2004.