Being a part time student may sound like a breeze, but in true Oberlin College student form, I've managed to jam-pack my semester full of things to do anyway: writing a novella, working several part time jobs, giving campus tours, helping coordinate a reading series, and trying to maintain some vestige of a social life in there as well. The most time-consuming activity of all has been the organization of a 5K run/walk this past Saturday to help raise money for the public schools here.

While living and working this past summer in Oberlin, I spent many summer nights putting in laps on the brick path around Tappan Square, the cool night air on my face, moonlight peeking through the leaves on the trees above. It was a peaceful tradition - one that both reflects on the safety of this town (parents on my campus tours always seem dubious when I say honestly that I never feel nervous being outside alone at night here, but it's really true!) and on the meditative quality of running that keeps me so hooked on the sport. On those runs, I reflected a lot on the love that's developed in me over the last three years for the town of Oberlin, and I began working out ideas in my head about how to connect more with the local community.

Running came into focus as the obvious venue for me, since it's something I was already fired up about. I met with Jason Hudson, the athletic director at the college, about the idea of organizing a 5K. Soon after, I was pitching the idea to the superintendent and school board in town, who were enthusiastic - albeit perhaps a little skeptical of my ability to pull it off. (I'm not always someone who exudes confidence about my ideas, as I have a hard time feeling proud or taking credit until something is all said and done.)

I plowed forward despite my trepidation, as I'd never done anything like this before, and set fundraising, publicity, and organizational efforts into motion. Two months of hard work and near-constant stress led up to this past Saturday morning, in which I had over 140 people registered to run or walk in support of the local schools. Families in town came out to participate, college students crawled out from the dorms in hordes (a rare sight at 9 a.m. on Saturdays here!), parents visiting from around the country for Oberlin's annual Parents' Weekend showed up, and runners drove in from all over Ohio to take part. 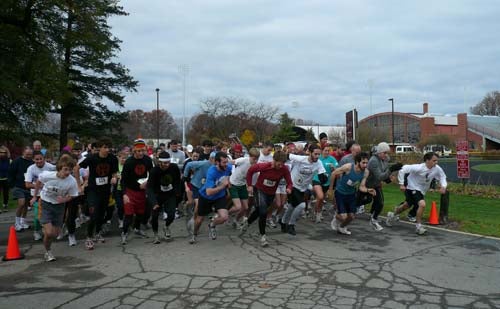 It was a thrilling morning for me - to see all this work that I had put into a dream of mine pay off. I was able to give well over $2,000 to the local schools, and the feedback I've gotten about the race itself from people has been enthusiastic and hopeful about this becoming an annual event.

It's been awhile, though, since I've had the time to actually go for a run myself - it's with great anticipation that I'm setting my running shoes at the door for a morning jog first thing tomorrow before life gets crazy again!