After my finals finally ended, and I finished packing up my room for the year, I flew home to Boston for break. Since I leave for my semester abroad in Denmark on January 18, I opted not to do a winter term project this year, since you only need to do three out of your four years at Oberlin. Without a winter term project, this has been a particularly relaxing break, and I've been getting a lot of quality time in with my family, home friends, Oberlin friends, and most importantly, my dog. Here are just a couple highlights:

1.Catching up with friends
Since I'm from Boston, I'm lucky that there are several Oberlin students who live in the area. This break, I got to see my friend Abby Cali who lives in the next town over just two days before she left to spend winter term in New Orleans. We played cranium (my favorite board game), ate Mexican food, and watched the Prince of Egypt with her family. It was tons of fun, and since she's a sophomore and is not studying abroad next semester, I'm glad I got to see her one more time before I left.

For New Year's, I went to my friend Emily's house, ate dinner with her family and watched the ball drop to some champagne. Emily is one of my oldest friends (we met in kindergarten), and it's great to see her, after months between visits, just to realize that nothing has changed. 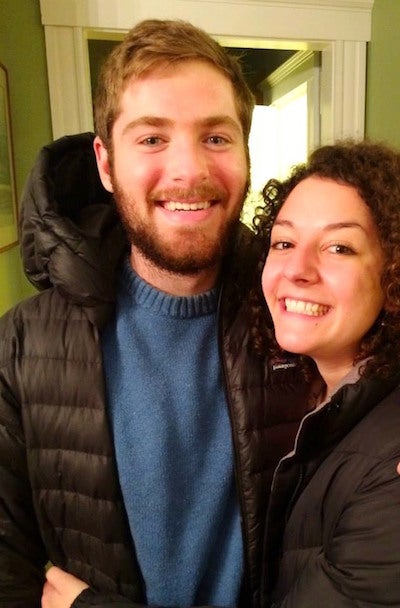 Me and Abby at her house

2.Having the time to read books that aren't for school
For Hannukah this year, my step-grandpa (or Saba as we call him, which means grandfather in Hebrew) brought me and my little sister to a local bookstore and told us that we could each pick out two books to buy. The catch was that he would choose an additional book that each of us had to read. The books I chose for myself were Americanah by Chimimanda Ngozi Adichie, which I've wanted to read for a while, and Not That Kind of Girl by our very own Lena Dunham '08.

Though I wasn't planning on buying Dunham's book, I couldn't resist after finding about five Oberlin references in the first three pages. My favorite part of the book is where she talks about her return to Oberlin and her convocation speech, which I saw in person! She talked about what was going through her mind at the time, revealing that she was actually quite nervous, though I would have never known.

The book my grandpa bought for me to read was The Examined Life by Stephen Grosz, which is a collection of stories written by a psychoanalyst about his interactions with various patients. My Saba is a psychiatrist and psychoanalyst, as is most of his family. In fact, my step-mother's family consists exclusively of psychiatrists, except for my dad:

Here's a family tree of my step-mom's family that I made using the handy kinship diagram tools I learned in my anthropology class last semester. Luckily for my dad, both of his parents were psychiatrists and psychoanalysts, so we like to say that his pedigree was "acceptable" to marry into the family.

3.Christmas party
Though my family is Jewish, every year we have a small Christmas party with our family friends Pam and Audrey. Coincidentally, they both went to Oberlin, so it's always fun to talk about my time at there with listeners who really get what I'm talking about. They always love to tell me that "things haven't changed a bit." Every year, we dress the holiday tree with the same collection of ornaments, and last year for Christmas I bought Pam (the host) an Oberlin ornament. Now, every year, we have a nice reminder of our shared school.

4.Preparing for my semester abroad
This coming semester, I'll be studying in Copenhagen, Denmark (!!!), at the Danish Institute for Study Abroad, which is a popular program amongst Oberlin students. I've never been to Europe before (in fact, the only country I've ever been to is Israel way back in 2011), so I am beyond excited to explore Scandinavia for four months. One of my close friends from Oberlin, Alix, did the same program in the fall and loved it, and she sent me and a couple of other people she knows who are going on the program in the spring a thorough guide to Copenhagen--the best bars, the best restaurants, you name it--which only heightened my excitement.

5.Hanging out with my family
Since my younger sister, Adina, is a sophomore in high school, she was on school break during the last week in December too. We tend to hang out late at night in the kitchen with 30 Rock or Friends playing in the background, and we love to eat. Indeed, since we were on "break time," which really just means we never had anywhere to be during the day, we would often make pies (chocolate pecan and key lime are our specialties) or cookies at around 1AM and eat them even later. Luckily, while my older sister (who is 25) does not live at home, she lives in South Boston which is only a subway ride away, so all three of us got to have a nice brunch at her place during break, and she's been able to come over for all our holiday gatherings.

Though all this is quite fun, my favorite days are still the ones where I sit on the couch and read a book for hours and hours with my dog curled up on my lap. 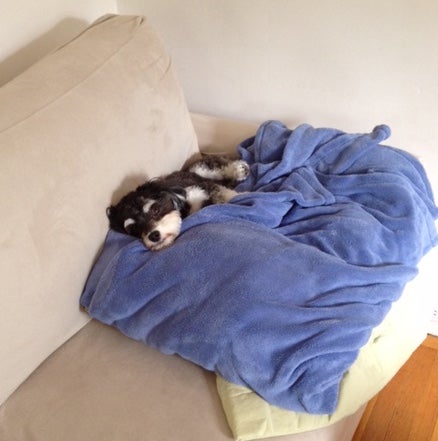