My fellow Mellon Mays Undergraduate Researchers and I [pictured below] recently returned from the Mellon Regional Conference in St. Louis, Missouri. I must say, I was expecting great things from the city, being that it is the home of Nelly and the Anheuser-Busch beer company. Unfortunately though, after spending last summer in London, Paris, and Rome, the Gateway Arch couldn't quite compete with Big Ben, the Eiffel Tower or the Colosseum. But the trip was certainly more than worth it anyways. 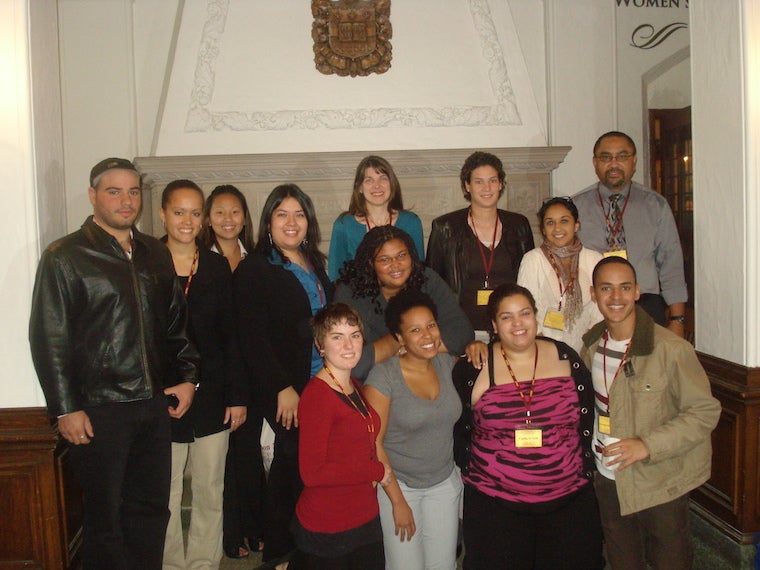 Some of you may be asking, "What is the Mellon Mays Undergraduate Research Program, and what is the purpose of it?" Well, my friends, you are in luck because I have an answer for you. The official response according to the program's website is:

"The fundamental objective of MMUF is to increase the number of minority students, and others with a demonstrated commitment to eradicating racial disparities, who will pursue PhDs in core fields in the arts and sciences. The Program aims to reduce over time the serious under-representation on the faculties of individuals from certain minority groups, as well as to address the attendant educational consequences of these disparities."

More importantly, the official response of Alicia C. Smith is:

"Mellons get paid to do an independent research project [under the guidance of a professor mentor] in order to prepare for graduate school and explore a topic of interest. The program also provides a sense of community and a dependable network of scholars you can turn to for support when you are doubting yourself academically."

For my project, I am investigating interracial dating at Oberlin during the 1970s, specifically among black and white students. I've been using ObieWeb [a comprehensive alumni database] in order to get into contact with alums via e-mail, and then I interview them via phone if they are interested in participating. You can speak to me via comments on this entry if you want to know more.

The hotel they housed us in can only be described as "off-the-chain" [for lack of a more appropriate term]. My only complaint about it was that they had every channel under the sun EXCEPT THE FOOD CHANNEL. Fortunately, having my own queen-sized bed with a mountain of pillows outweighed my desire to catch-up on episodes of Diners, Drive-Ins and Dives.

Anyways, on Thursday night [our first night there], we dressed in our business attire and had dinner on the top floor of the hotel which overlooked the St. Louis skyline. They gave us so much delicious food, and they had an open bar. Even though I forgot my ID so I couldn't complete my classy look with a glass of red wine in my hand, I felt halfway professional with my chic glass of diet coke. We had assigned seating, which initially made me nervous--the thought of 3+ hours of awkward conversation with people I've never met makes me a bit uneasy. Fortunately though, everyone at our table was really friendly. I chatted it up with a history professor from Carleton College, who I learned was a gymnast at Princeton during his youthful [and more nimble] days as an undergrad. I was tempted to ask him to do a somersault to prove his claim, but I felt that we weren't in an appropriate environment. Maybe next time.

I've never been surrounded by so many high-achieving, academically consumed people--especially people who look like me. It was a really cool experience to see a room full of people from underrepresented groups all pursuing independent research projects. Some former Mellon fellows who are now pursuing their PhDs or have already completed their degrees came to the conference as well, and it was re-assuring listening to their encouraging sentiments.

The next day, we got all dolled up again and attended a couple workshops at a fancy conference center on WashU's campus. In the morning, we were split into groups of about seven students, and a professor-esque person to facilitate discussion. I was in a group with one student from each of the participating schools, and a WashU alum who is almost done with his PhD at NYU. We each spoke about our projects and then gave each other feedback on how to improve our research. I was surprised how quickly the three hours went by, and equally surprised by the immaculate snack tables they had set out for us for break time. Baked goods, candy, and coffee--oh my! The life of a scholar is truly fulfilling, both in the mind and in the belly.

In the afternoon, I attended workshops on the "Art of Critique" and "The World of Teaching Assistants." By the end of the day, I don't think I could talk about anything academic anymore or else my brain was going to explode. Literally, my skull probably would've burst and my professor/ex-gymnast friend from Carleton would've had to do hands-free back flips to avoid getting hit by the pieces.

Okay, I'm obviously exaggerating--just keeping you on your toes. The experience was entirely enjoyable and worthwhile. I just can't get over the fact that that man was a gymnast. How cool is that?

That's so cool! I love how overwhelming conferences are. ...I've only been to really nerdy ones (anime + circus), but they've made me love them so much more.

(Cleveland rocks too, though.)

I love the show so much that I made a fan site devoted to Diners, Drive-ins and Dives with all the locations he's been. Guy Fieri was nobody to me until I went to the Byways Cafe on a trip to Portland. I love local food and hate chain food so it was cool to see a show that pimped small business. Cheers to you Guy and keep up the good work!