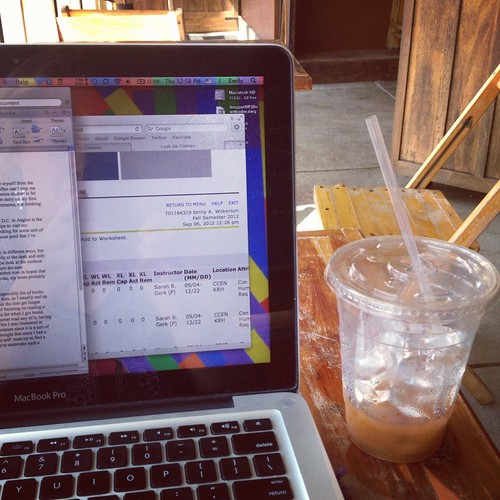 Taken with Instagram, which I fell in love with this summer.

As I write this I'm at a table in Slow Train, trying to distract myself from the madness that is add-drop week. Alas, even a cranberry scone and an iced coffee can't stop me from thinking about the fact that doing music at Oberlin as an Arts and Sciences student is far more difficult than I believe it should be or that I was assigned a Kafka short story on my first day of intermediate German. As usual, my list of worries and anxieties is overlong, but thinking about summer may be the perfect antidote for my add/drop woes.

Aside from a week-long family trip to Washington D.C. (because going to D.C. in August is the perfect idea for a family that loathes heat and humidity) and two shorter trips to visit my grandparents on Cape Cod, I stayed at home for the summer. Instead of looking for some sort of internship or a job in a field that I'm interested in, I chose to work at the same pool that I've worked at for the past four summers.1 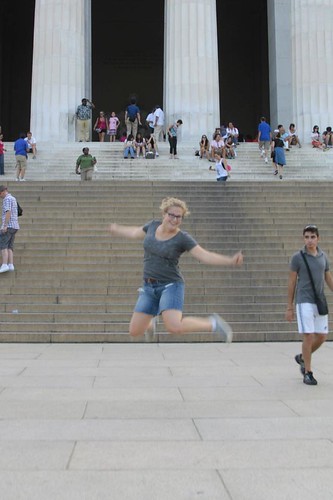 This summer, most of my shifts took place at the control desk as opposed to the lifeguard chair. Working the desk at the outdoor pool was pretty boring. My job mainly consisted of figuring out the new computerized billing system, making sure people signed in, checking weather.com in hopes that it would storm, and answering the phone. Without some good books (and a lot of crossword puzzles), my brain probably would've been draining out of my ears by the end of the summer. 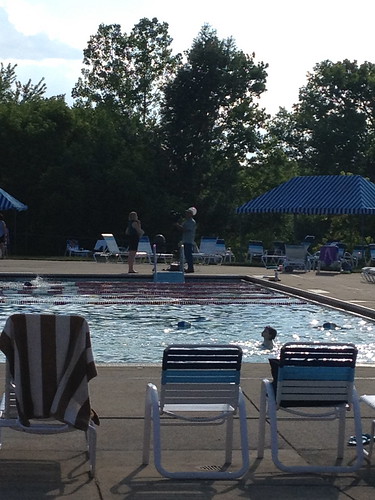 On the day that I took this photo (via Instagram), several news crews came to the pool to cover a recent incident where someone dumped a bunch of broken, clear glass (and for good measure, some of our lawn chairs) into the pool, forcing us to close for a week so we could drain, vacuum, and completely refill the pool. True story. Vandalism sucks, kids.

Which leads me to my summer book list. Every summer I compile an impossibly long list of books that I don't have time to read over the academic year. I never finish my lists, so I usually end up carrying the forgotten books over to the next summer's list, meaning that the lists get longer every year. This summer's list was slightly different - instead of focusing on reading a lot of books, I decided to attempt one large book with some other books on the side for when I got bored. That big book was the Bible. Before this summer, I had never read any of it, having never gone to a church that offered traditional Sunday School classes, but I was interested in doing so, mostly because I thought it would enhance my reading of literature since it is a sort of "base text" that nearly every Westerner read for hundreds of years. I thought that since I had a job that practically required filling my spare time with reading (note to self: must try to find a real job with the same requirement), this would be the perfect summer to undertake such a massive project. I consulted a few clergymen about how I should go about it, ignored their advice completely, pulled my dad's old Sunday School Bible off the shelf and got started. 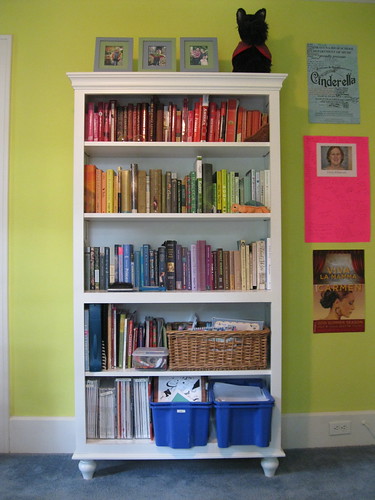 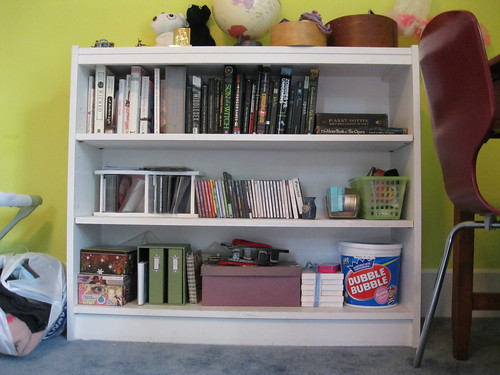 Speaking of bookshelves, I reorganized mine this summer to accommodate my growing personal library. People clearly need to design more purple, orange, and yellow book covers and fewer black and white ones.

I realized almost immediately that reading the Bible is incredibly slow going. Simply put (and without wishing to offend anyone), most of the Old Testament is dull. For every page that contains a compelling story, there are probably five more pages full of laws that were irrelevant for my purposes or endless strings of "so-and-so begat so-and-so." I considered abandoning my project after the first day, but I decided that I needed to keep with it for a while longer.

After a few weeks, I resigned myself to only reading the Old Testament, thus reducing my page-per-day count a bit and evening out the days I hadn't read as many pages as I should have. By early July, I felt like my project was pointless. I was more than 300 pages in to my edition of the Bible and when it came down to it, I wasn't actually enjoying it. Normally when I read a book for pleasure that I don't like, I stop reading before I get to page 100. I didn't want to abandon the project, but I couldn't picture a scenario in which I finished the Old Testament and enjoyed it. 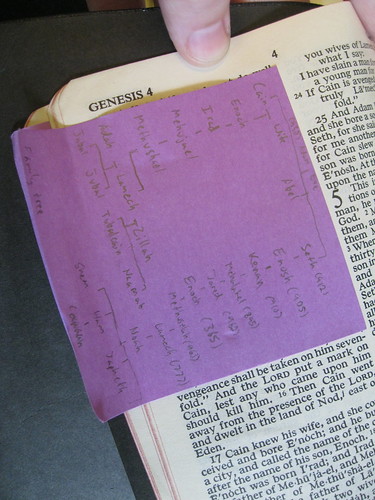 I started a family tree while I was reading Genesis, but I quickly realized that it was futile.

I could write pages more about my project, but all you really need to know is that shortly after, I decided to abandon it altogether. I expected to feel guilt after I put the Bible down for the rest of the summer, but the feeling I experienced when I decided to focus on other books on my list was closer to relief. 2 Quitting on the Bible was a good reminder that I don't need to do anything that makes me unhappy, especially when that thing is reading a book for fun. It's a bit harder to have that attitude when it comes to a class or a relationship or a job, but the same principle holds true - if it's a negative influence on your life, it's probably best to let it go. Yes, there are some things that we can't put a stop to no matter how much we want to (for example, my little brother's sudden change in height, making me the shortest Wilkerson), but that's just another reason that we should take control over the negative things we can put a stop to. 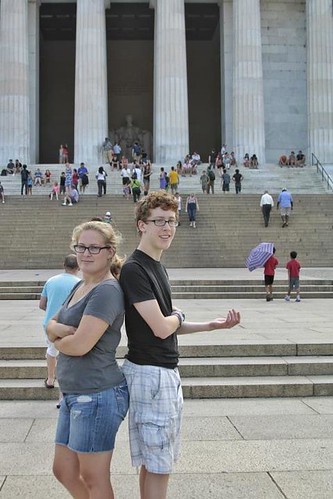 Seriously, what the heck, little bro? (this was also taken by my mom)

It's easy to lose sight of that. I did last semester when I was taking a class that I found academically unfulfilling and trying to keep relationships from home afloat even though they brought me nothing but stress. It's an important lesson to remember now as I'm sorting out my schedule, trying to figure out a potential major, and once again face the question of who I should keep in touch with from home. These choices will never be easy, especially for someone as prone to over-thinking things as I am, but I hope that the option of just letting things go will make my choices just a little less difficult. I guess I'll have to wait and see if I actually apply my own advice to my life while I'm at Oberlin this year. Who knows, maybe I got more out of reading (and quitting) the Bible than I initially thought...

EDITED TO ADD: Apparently this post made my mom sad, so just in case she's not alone in that feeling, i just wanted to clarify that writing this post didn't make me sad. In fact, writing this post was kind of freeing. It was meant to be a sort of ode to only doing the things that make you happy (actually, it was meant to be a post about my summer activities, but my subconscious took over and changed that pretty quickly). Long story short, please don't be sad when you read this post. I'm not. :)

1 I also had a side gig conducting interviews and writing vendor profiles for the Schenectady Greenmarket, but since I only ended up doing two of them, I can hardly count that as a second job. Also I didn't get paid.

2 If anyone's curious, my favorite books from the summer were Neverwhere by Neil Gaiman and 100 Years of Solitude by Gabriel García Márquez. Runners up were Bridget Jones' Diary by Helen Fielding (which I listened to as a book on tape) and the first two installments of the graphic novel The Walking Dead. Other than those, I read a lot of YA novels of varying quality.