I love warm weather. Everything feels better when you can walk out the front door and realize you're wearing too many layers. Amazing. Food tastes better on days like today, 60 degrees and sunny. I wish I was running more, it's perfect weather for hour and a half long runs with sweaty, shirtless men. I did play frisbee last Friday for like three hours in Wilder Bowl with Mike and Andy, and woke up sore on Saturday because of it (so pathetic). It's refreshing also, to know that, while Oberlin students might sacrifice fun Friday nights to study for a big test on Monday, nobody's in a dark corner of the library on unseasonably warm March days.

I went to the Oberlin Jazz Ensemble concert last Saturday night by myself. I kind of like going to concerts or whatever alone. I brought my camera with me, and didn't have to feel self-conscious leaving my friends for a moment to get a snap from the side of the performers or from the floor of the aisle. 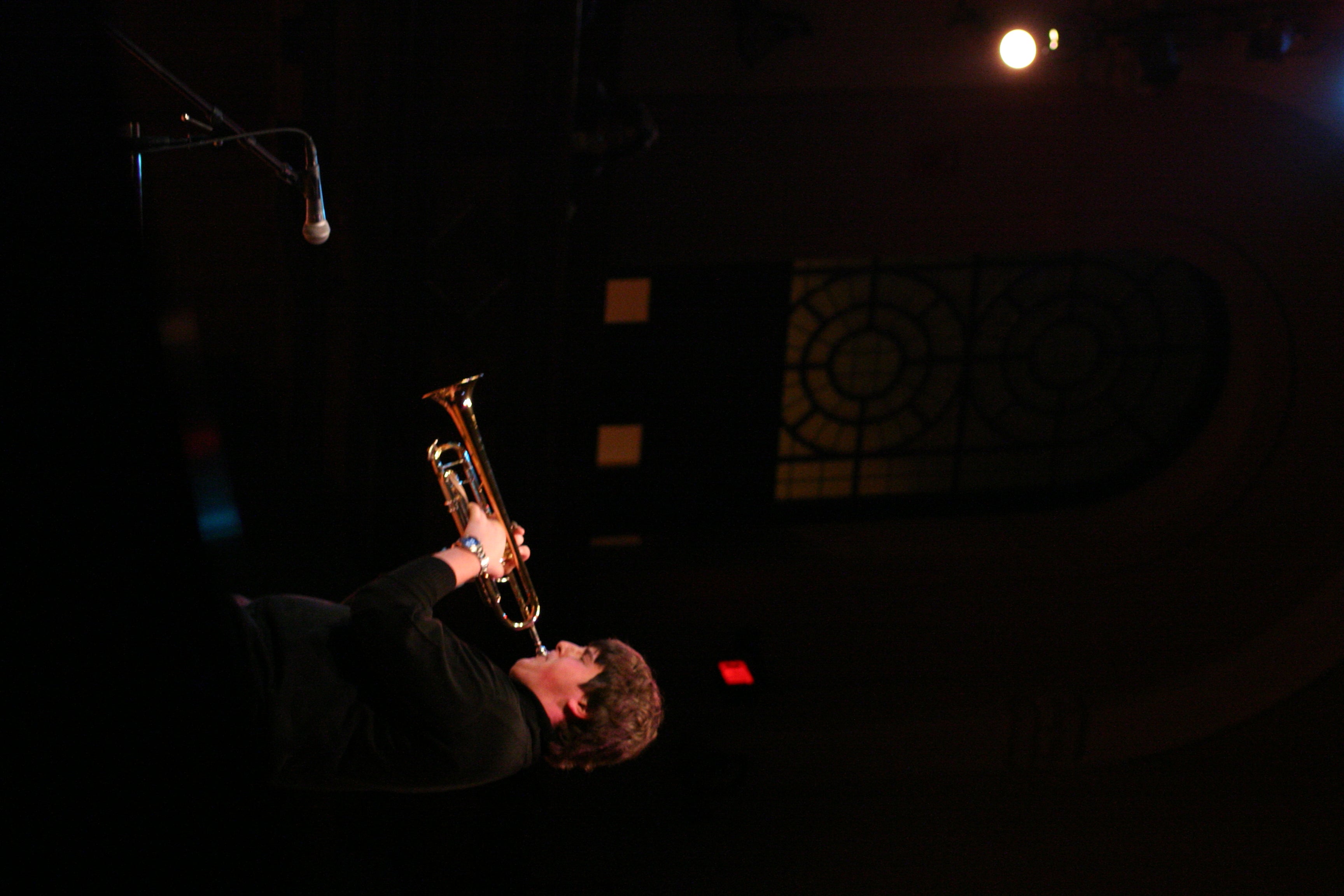 Last night, woo boy! I saw Robert Post in Finney Chapel, which was something else. His craft is 'comedic theater,' according to his flyer, I guess so nobody will confuse him with a comedian (you never would, anyway). His style was more comparable to mime, with some circus skills and impressions thrown in. Either you think he's a genius, or you probably left at intermission (I tried to leave). His first act involved dancing with long underwear for a partner, playing all the characters in an English mystery play, and telling the audience to laugh. I grabbed my camera bag and coat at intermission and headed for the door with Kiron, when Mike stopped us.

"No! This is hilarious!" Mike had been in a really giggly mood since dinner, and I suspect he had eaten some of the vegan fare that I avoid like the plague (not that it's bad, I just don't know what the hell it is. It looks like meat, what could that crap be?). I decided to up my resolve. Bobby Post sure hadn't earned it, but there were people in the audience laughing, so maybe we could find out what was so funny. Half of our group was depleted, but we went back into Finney and down to the fourth row, where the performer would have surely heard our snide remarks during the first half. This was the origin of the shrieking, shrill laughter that even the performer commented on halfway through the first act. I remembered the laughing clubs popular in India, were people gather in large groups and laugh loud, 'lion laughs' at nothing in particular, just because it makes them feel good. I was determined to get some therapy out of being there, if nothing else.

The second half began with two headlights staring out from a dark stage, and then the lights came up on the Post-man and a dummy that looked a little like him. What followed was a charming little act between Robert and his 'son.'

The people around us laughed, and we laughed more the second half too. Posty did a bunch of circus-type stunts, which was certainly more interesting than acting out a scene to a track of sound effects, which was a feature of the first half. You know how you feel when somebody tells a dumb joke and you don't laugh, and they go 'Oh, you don't get it.' No, I get it. Your joke's just not that funny. I felt like that for about 45 minutes solid.

Now, I'm not saying I could do what he does. He's very good at manipulating his body, and making his hand look like a scarf. He's original with most of his stuff. But he kind of reminded me of a worry I had before I came to Oberlin. I'm a fan of pretty mainstream music, generally. I watch LOST on Wednesdays. I worried if I would be ostracized in a place where subculture is the culture, and you have to go sub-sub-culture to be considered hip. Hep. What, you guys don't say hep? Pshht. I don't think Robert Post went over my head because I'm not cultured enough or whatever, I just think he wasn't entertaining. Harpo Marx and Marcel Marceau and Grock the clown did the same kind of things in their time (Mike pointed out that the long underwear dance was Marceau's bit, in fact), and those guys were funny as hell. They still are.

Turns out, a lot of people watch LOST. And Heroes, and like Top 40 kind of music, and even profane their hipness by eating peanuts. PEANUTS! How '90s is that?!

Anyway, we got out of the theater at the end of the night, and Mike confessed that he hated the thing and made us stay as his own little Andy Kaufman style joke. There's some real comedy for ya.

The only person who says hep is Hunter S Thompson. Way to be a throw-back.

Otherwise, just wanted to heartily echo you for :
" I hate charming shit."

Oooh that VEGAN stuff!! What IS that? Always looked so scary at my Similar Alma Mater. What the hell is a Red Lentil Orechiette? Soybean-Miso Cakes? Yeecchh.