The Finney organ is famous. It's eerie and beautiful and very intimidating, but you get used to it. It's one of the first tangible things that I knew and remembered about Oberlin, since I read about its renovation in the alumni magazine in 2000. Also, on the first evening of freshman orientation (also known as my first Oberlin experience), the opening convocation presented by then-president Nancy Dye was overseen by the Finney organ that silently (or not so) watches everything on its stage.

Finney Chapel, along with being gorgeous, is possibly my favorite chapel I've ever visited (and I've been to Italy, too). Despite the religious implications of the word "Chapel," Finney Chapel has no religious symbolism around the building. The stained glass in the upper window is an abstract red and blue piece. When the light shines through and fills the room with light, I feel more religious than in a more conventional place of worship. It's pretty magical.

Last year, Oberlin's Winter Term circus, Nocturne, was presented with the opportunity to perform their show in Finney Chapel last year. The same stage that is graced with world-famous musical talent and convocation speakers of all shapes and sizes (I only say this because Diane Rehm brought her dog Maxie to her talk last week), has now added a circus to its constant repertoire. Nocturne was performed again during last year's commencement, and this year's spring show will be revamped for the Finney stage during the 2009 commencement weekend.

Why this shameless plug for OCircus!? Well, this boisterous show incorporated the monstrous Finney organ in the show's musical orchestration. Imagine a playful pipe organ version of Mary Had a Little Lamb accompanying a three-ring circus on the stage of a chapel. Organs and circus... it's a combination people wouldn't expect, but then again, the circus suspends belief sometimes.

For my Advanced Media Production class, my friend Chris is making a music video to the organ piece Toccata from the Suite Gothique by Leon Boellmann, which will accompany a story told by one of the Storytelling ExCo instructors Andrew Gombas.

Andrew Gombas is a wonderful creature, a lively freshperson who has a story for any situation. He's considering an independent major in Narrative Arts, which is perfect for him. Tell him a story, he can top it. He is pictured here, in my long-ago post about my time in the Storytelling ExCo, when he was but a wee first-semester first-year.

His final story for the ExCo we were in was called The Dollmaker, a terrifying narrative about a psychotic dollmaker who is into family planning: using part of his family to make a plasticine version of his family who won't dislike him. It is a riveting story; the first time he told it, Liz and I held each other in fear and screamed together at the really scary parts. I refrained from kicking him in the face that time, which I accidentally did when he told a real-life (different) scary story in my class. That said, The Dollmaker is an amazing piece, and very memorable. No one can tell it like him.

For such a scary story, one needs a scary piece of music, and there is nothing more ominous than the Finney organ. Chris contacted a bunch of folks to find an organist, to get permission to film in Finney Chapel, and to find a crew to help her carry and set up equipment, including our new HD video cameras, and shoot this part of the film: the master sound recording of the organ piece and of Andrew's story, as well as some stock footage of the organ and Andrew in this magnificent space.

Chris and Daniel imitated Beethoven in his conducting conniptions and Lucas did handheld camera closeups of Trip, our organist, as the piece rattled the stage and our bones. Since there was no way one could hear the camera over the organ, I took the opportunity to do some on-set photography of the shoot, which are enclosed below.

For the record, I am already scared of this story, but hearing it retold in such a dark and echoey space, preluded by an organ piece played in a dark room, well, it was amazing and nerve-wracking. It was the coolest shoot I've even been involved in.

We also finished our shoot undertime (we had Finney from 9:30 until midnight, but we were out of there by 11:30), so Chris departed to import footage onto the master hard drive and I left to do my own video editing. April is such a timecrunch. 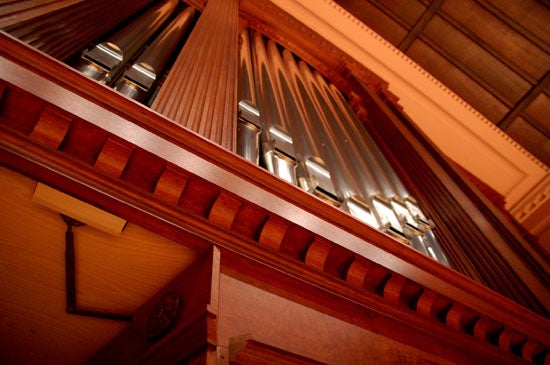 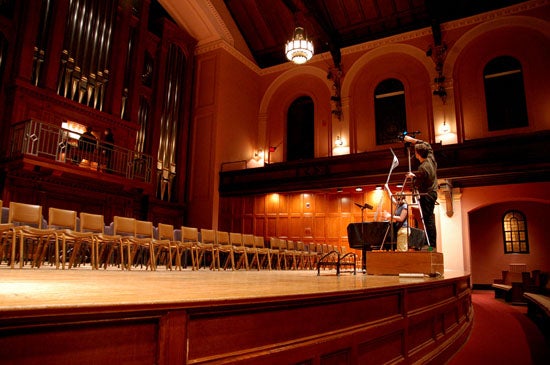 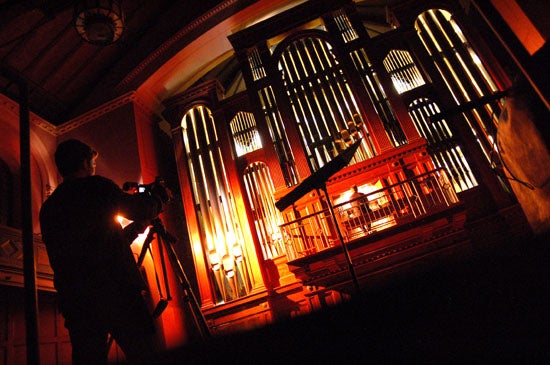 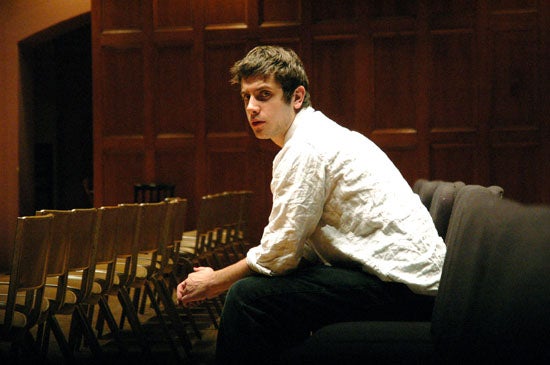 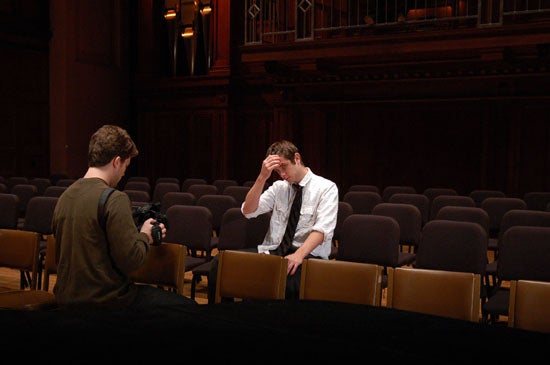 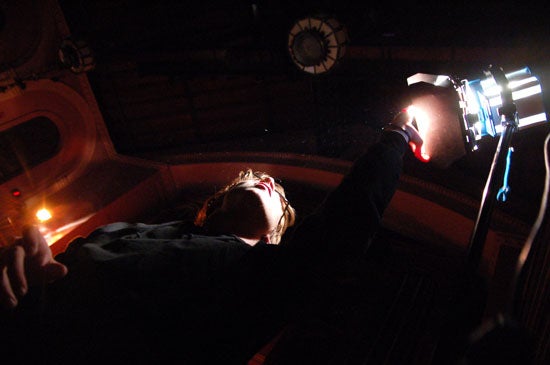 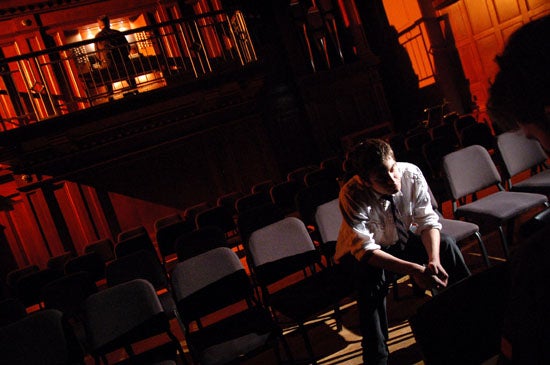 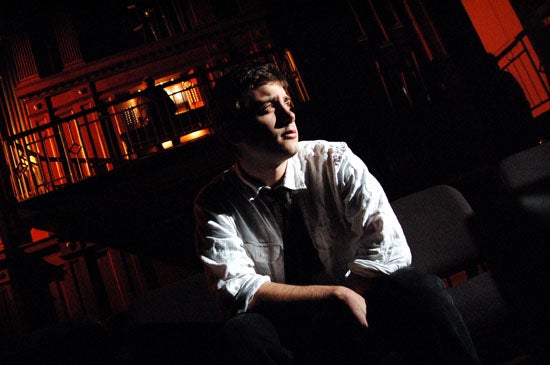 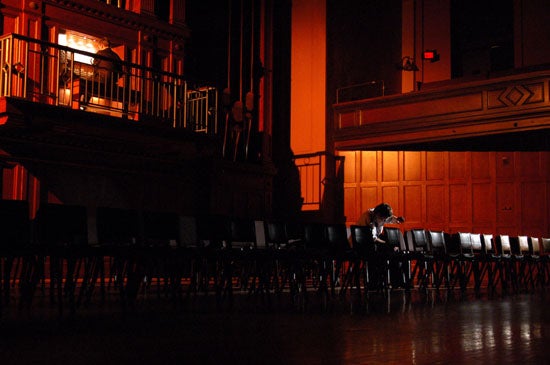 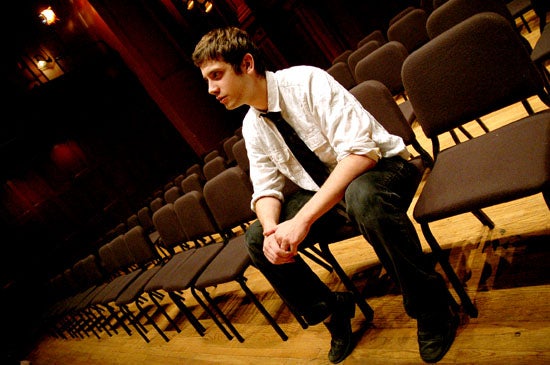 You're plugging the circus cause you recognize quality, my friend.

I love how this was my shoot and yet I'm only *just* visible in *one* photo. Gotta love behind the camera jobs.