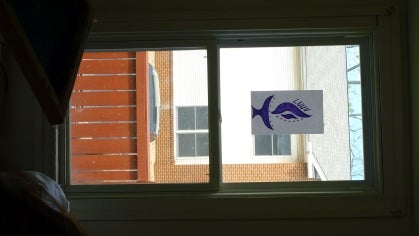 Like many Obies, I was raised non-religious. I knew that organized belief systems existed, but my family didn't go to church, though much of my extended family did. Aside from them, a brief infatuation with Aslan when I was five, and two years of determined self-directed Jedi training beginning at age eight, I haven't really had contact with anything that could be called organized religion. So it may seem a little weird that one of the first things I did when I arrived on campus as a freshman was attend the local Unitarian Universalist welcome-students potluck.

There are two explanations for this. The first is that the UUs had a good system in place; the second is that I wanted to meet people. On the Campus Spirituality Office form in the Big Book of Forms, you can check a box for any local religious group you'd like to receive information about. I decided to check the box for the UUs. Why the UUs? Well, I had heard Unitarian Universalism described as being "church for atheists," involving studying world religions than helping people develop their own worldviews. That sounded good to me; I have a lot of unfocused spirituality and general curiosity. (Jedi, remember! And I think I would have enjoyed hanging out with Thoreau. That kind of spirituality.)

So I checked the box and the UUs had my contact information. One of the first pieces of campus mail I got was a postcard telling me about the potluck. I thought that would be fun, so I went. I met quite a lot of people, including two other freshmen. I went to church for the first month and a half, stopping when Neil Gaiman came to Cleveland in October; Sci-Fi Hall rounded up a bus to go see him and I experienced a sharp shift in priorities. (I haven't attended regularly since. Oops.)

I did, however, attend meetings of the student UU group on campus, Liberated Unitarian Universalist Voices (LUUV). These were interesting and enjoyable. I am not the only Thoreau-ish person around, not by a long shot. Actually, directly spiritual discussions weren't terribly common, which was a bit surprising; still, the right kind of conversation scratches the same itch, and there was a lot of that going on. We talked about current events and philosophy and classes, idealism and friends and books. We led a regular UU service one day on ExCos and the importance of taking your minor interests seriously. We made cookies during winter finals week and French toast in the spring. I didn't make it to every meeting or event, but I had fun when I did. I enjoyed it so much that I signed up to be an officer at the end of freshman year--several of us did, so that the club could get its charter renewed.

Sophomore year, I had to lifeguard at the first meeting. It was really just a planning meeting between the advisor, Christa, and those of us who had demonstrated a high degree of interest and volunteered to be officers, so I figured I wasn't missing much, just officer elections, which, given the low-key nature of the group, wouldn't be that big a deal.

I got appointed president in my absence.

It really wasn't a big deal; in fact, it was kinda fun, though I did feel guilty whenever I was too busy to give something the attention I felt it needed. The only real change was attending planning meetings at lunch some days. That was probably good for me: I learned a little about how campus organizations work and realized how slow committee decisions can be even when everyone likes each other and wants to get things done. Those decisions were particularly interesting because we were attempting to restructure LUUV. The scattered meetings advertised by Facebook group and mailing list were nice, semi-regular gatherings of interesting people to do a specific thing, but we weren't meeting on a schedule or doing anything explicitly UU-related. We figured that there were a lot of people on campus who would like to drop in on LUUV meetings occasionally if we had a regular meeting time. Such people might like at least a little structure within the meetings.

So, last year, we attempted to meet on Wednesdays every other week for discussion and a kind of do-your-own-thing worship. These went well at first but soon petered out as people got too busy. Our single biggest success of the year was a guided meditation during fall midterms, followed by pie; we had at least thirty people for that, probably more. Some people were so exhausted they fell asleep during it; others, like me, found it relaxing and anchoring. A few people were probably more inspired by the pie and conversation. In any case, people got what they needed.

Second semester we tried meeting every week, rather than every other week. This worked well, but we didn't have a very good turnout--it was usually the same four or five people. We figured, at our lunch meetings, that this was due to a lack of visibility: people don't know about LUUV unless they're on the mailing list, and they're not on the mailing list unless they know about us. Our plan to escape this catch-22 hinged on posters and t-shirts. We hit on that plan at the beginning of last semester and put in funding requests for about a few dozen really nice posters--there's some group on campus that silk-screens posters for campus groups, shows, etc. We got the funding, but weren't sure what to put on the posters! There was a grand scheme to have a series of them, one for each of UUism's Seven Principles. That never got off the ground. We were going to tie-dye t-shirts, but the weather refused to cooperate; we had a long, depressing, wet spring.

We did, however, get a lot of sketches of possible poster or t-shirt designs. Some of them I put to use on more prosaic posters: I printed out dozens of papers with a picture of a chalice and our meeting time and location and posted them all around campus.

I think that this year things will finally get off the ground. We've had other groups interested in working with us, particularly the Oberlin Buddhists; I think there's some interest in coordinating meetings and sharing schedules with them. We're meeting on Thursdays at eight and having student-run mini-services every week. And while I don't know what, if anything, is happening with our poster series, the t-shirt idea finally came to fruition. The technique we used, though, was much cooler than tie-dyeing and allowed us to advertise much more effectively: silk screening!

Christa, our advisor, had done this before; she's a member of Backbone, a band I mentioned in this blog, and made band t-shirts before. Silkscreening a shirt can turn it from something boring that you hardly ever wear to something cool you like showing off, and, unlike tie-dyeing, you can do it to any shirt, regardless of its color or whether it already has print on it (you can screen on the back). On Sunday, she brought her paints and screen to the Oberlin Unitarian Universalist Fellowship offices and we brought our t-shirts. I also brought my camera.

I forgot that I'd been taking video footage the day before, so when I first tried to take a picture, I took a video instead.

Silk-screening is actually a simple process. You start with a wooden frame with silk stretched across it. To make a design, you need a template. There are different ways of making this, Christa explained, but we were using a design cut out of contact paper--it's easy and inexpensive. This stops the paint from going through the silk except in the cut-out areas. Paint is drizzled along the top of the frame and then smeared over the entire design with a squeegee. Two or three passes transfer enough paint onto the shirt (or poster) for it to be complete. You can use multiple colors together. The first item made with a mix will have distinct color stripes, but as you make more, it will get more muddled. Both effects are striking. 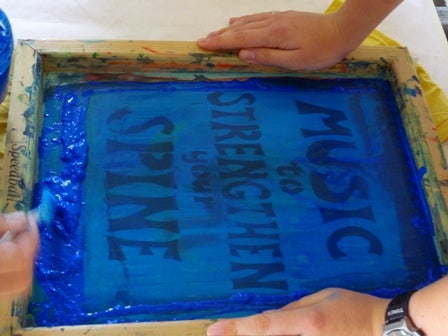 If a design is used a lot, it leaves a mark on the silk. This is the imprint of one of Christa's Backbone designs. It doesn't leave any mark on whatever you're trying to screen later. 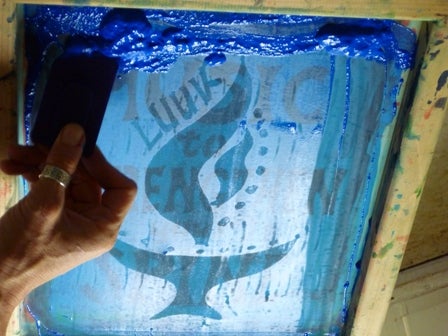 It began happening with our design, too. (The UU symbol is a chalice.) 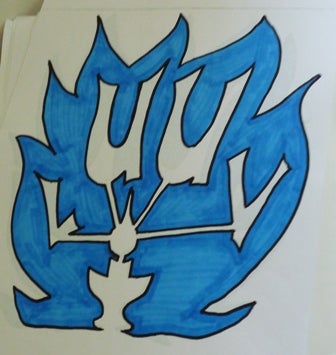 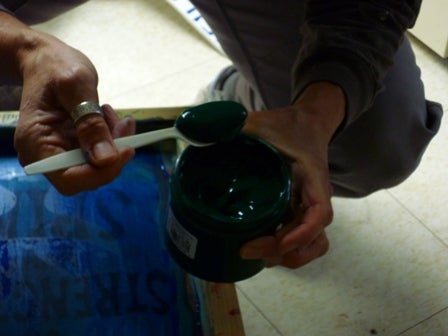 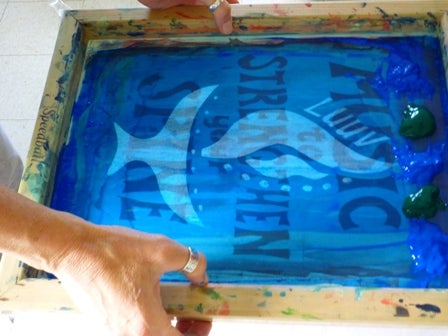 Adding green to the blue to make stripes. 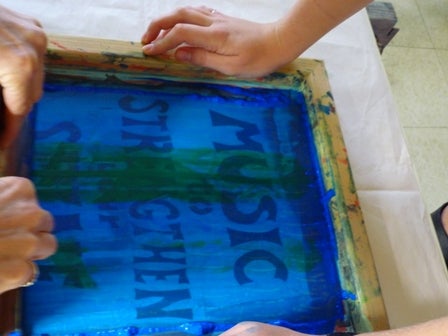 The stripes were tested first on a poster. They came out nicely. (We're actually using the backs of other posters for our homemade ones. Recycling is great.) 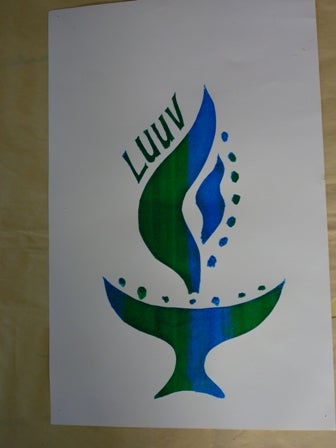 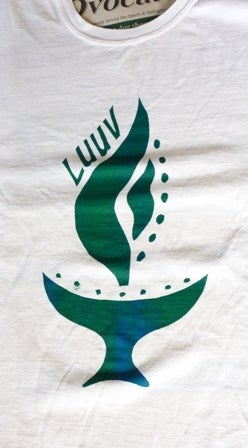 The second time through, the colors were much more blended, with the green dominating. 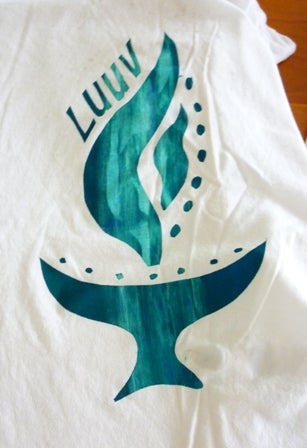 Adding white to the mix. 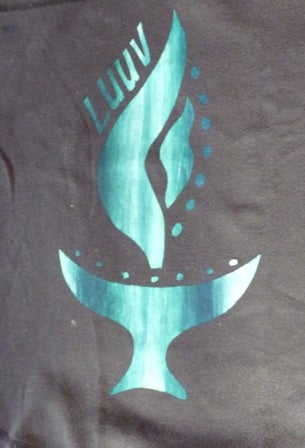 I think it looks even cooler on black. 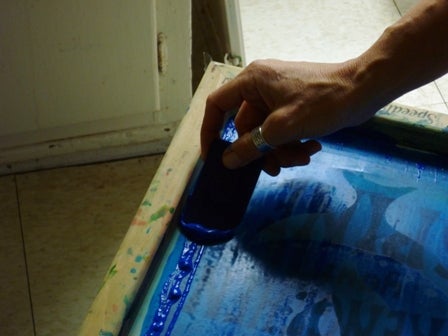 Christa moving paint from the edges, where it wouldn't get on the design, to the center. 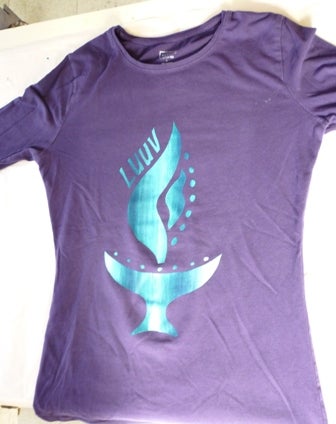 This one is mine--a nondescript purple shirt until this morning. 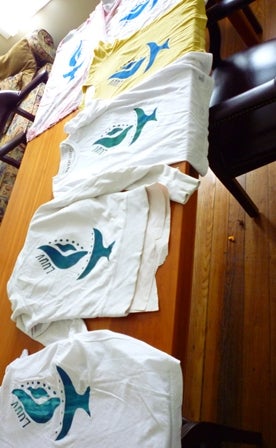 Partway through, I took some pictures of the shirts drying. Once they were dry, Christa was going to take them home and put them in the dryer--heat helps the design set. We'll pick them up at this week's meeting.

Yeah! I really like the idea that religion is what you love.

Not getting into a religious discussion right now, but in a speech class I took at a community college during high school, the instructor brought up that her definition of religion is that thing you live every day without thinking about, but when you do, it brings you joy. That said, I think it's completely legitimate that Neil Gaiman was your religion briefly :P

Those shirts are awesome. Just sayin'. I can't wait to see them in real life!

How is it that I am constantly learning brand-new things about people I have known for a very long time? (A.k.a. — in your case — since the Neil Gaiman trip, where we met.) Point being: I had no idea this was a thing that you did/were involved in/whatnot.

Well, I didn't know where you came from until two weeks ago, so I guess it's even. ;)

It's not a thing I talk about much, I guess--my UU friends and my other friends don't know each other for the most part, so you wouldn't know who or what I was talking about. (Also, sometimes people seem uncomfortable talking with agnostics about religion/spirituality, which is too bad, because I actually really like it.) But anyway, yes, it's a thing I do/am involved in/was accidentally president of.

Tess, these pictures are great--thanks for posting them!

Plus, I love the way you describe how you "accidentally" became president. Now your readers will know not to miss an organizational meeting when it's time to appoint new officers!