To protect the innocent and those who learn a new thing when their teachers are oversharers (and more importantly, so you don't pester my pupil into making you dinner or sharing all the recipes with you), I have named our pupil Om (short for Omnomnom, of course) and will refer to them by the pronouns she, her, and hers for the sake of those reading this post. Om could be you, or me several years ago, or a version of ourselves that we know exists in some capacity or another. The name is not important, nor should it be invoked in the comments should you actually know Om or her winter term project. Unlike the name, the project, on the other hand, is vital.

I mentioned casually in a previous blog post the project I was helping with this January, lovingly subtitled "The Need To Feed." The project sprung from an off-handed comment that Om was scared of stoves, which, after digging a bit deeper, I discovered meant that she hasn't the slightest clue what it meant to cook things.*

It's a lesser known (but still extremely prominent) goal of mine to bring food into people's lives. I make adjective sandwiches. I cook like my life depends on it — it's my preferred creative playground and stress reliever, beyond also being a vital and important part of life as I know it. But I also teach people how to cook. Over this winter term, I talked about food a lot. Every time Om's project came up, I was talking about the process of learning to cook and what it took to learn something that so many people acquire through different sources at different times to varying levels of expertise, and in many of the conversations, there was a moment when someone mentioned that I had taught them something they now do regularly when they cook or eat. Humbling, right? (I'm blushing just writing this. But it's cool. Really really cool. Food is for sharing, and I'm pleased as punch to be a part of this process.)

I read a book called Kitchen Secrets: The Meaning of Cooking in Everyday Life over winter break, which dissects case studies and analyses of what it means to cook, in short, attempting to define it to the best of our abilities... and yet after 150 pages of analysis, there is no one clear definition (yep, sounds about right). The book wasn't meant to be research for this month but it ended up settling comfortably in the back of my mind for much of January and now, moving forward.

So. Enough thinking. You want to hear about the food. Here's how this month went.

Om was required to do the following things over winter term:

I mentioned the mentors above, so now might be a good time to say that I had two co-mentors accompanying me on this journey to write recipes, answer questions, annotate Om's cooking journal, and generally be excited about delicious foodstuffs. The crowning moment of this month was a weekend trip to visit a slightly removed mentor and cook/eat our faces off in Boston. It was nothing short of delightful.

Sounds great, right? Well, that was the beginning of our plans. What actually ended up happening over the month of January:

It's not a post about a food winter term project without some pics, so I'll share some now. Because Om made noms and I am really proud to share them with you, and because like I said, no pestering. There are recipes to be had should you desire them (comment on this post if you want any of the recipes from this month!!). 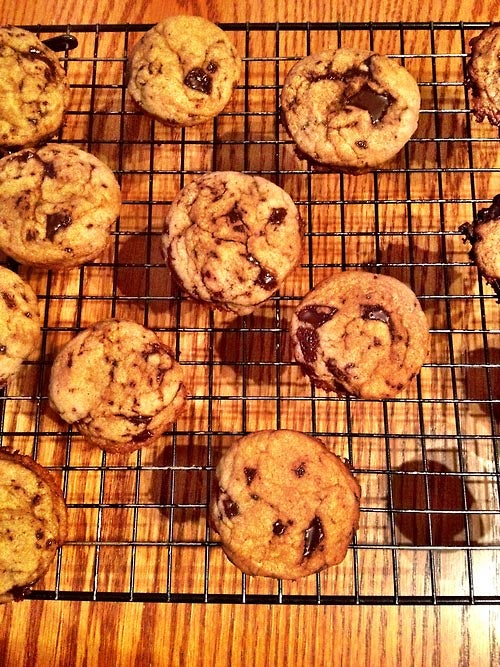 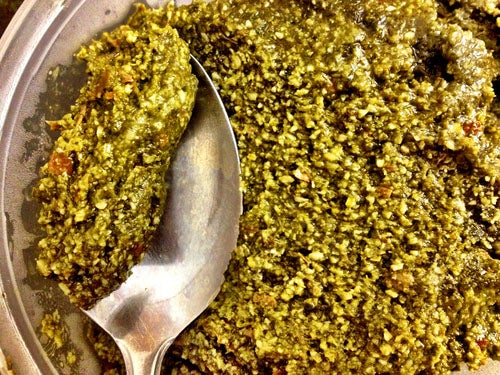 Kale Pesto (recipe) Sidenote: This is, in fact, the most delicious pesto you will ever eat. And you will lick it off a spoon and exclaim the whole time, "I can't believe this is vegan!" 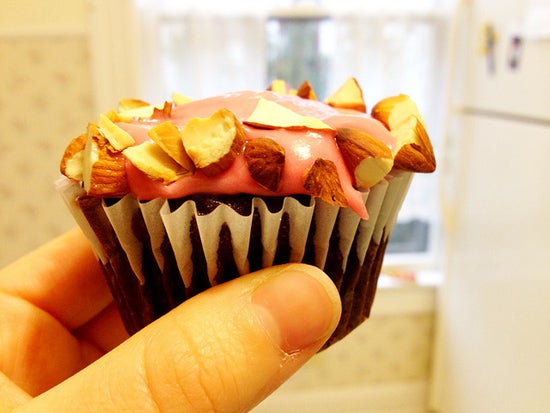 I learned a ton from being a mentor this month, but the most humbling part was the fact that I barely remember what it feels like to start something completely foreign. I witnessed a huge amount of frustration at the beginning of this month, a helplessness that only really comes when you're doing something new for the first time but you know you have to slog through till the end. With something you recognize has a final product (and believe me, not everything does... and that's even more frustrating) and a series of steps to get there, your mind either takes on the challenge of organization and perseverance or it curls up and shrieks "No no no I don't like it make it stop" until you figure out a better way to do it. I know both feelings well (and you probably do, too). With cooking, there are a million variables, but you also have an end point. It's a worthy task to undertake, in my (cook)book.

But in doing things more and more, you become better over time. The last time I remember doing something this overwhelming was learning to spin poi, a painful but rewarding experience that's now a central point of play and enjoyment for me. It took almost a year to master the most basic moves, but I enjoyed it (even when I bopped myself on the head a lot trying some new tricks). I wouldn't consider myself an expert — except at one-handed moves! That's my "signature dish" skill; I'm pretty awesome at it, it looks awesome, and I know how to teach someone else how to do it, too. — but I can do it to a point that I'm pleased with doing it myself and I'm willing to do it for others, too.

Truth be told, I wasn't sure Om would make it through the first day with a final likable or digestible product. Her cooking notes were filled with confusion and uncertainty. I was nervous to arrive home and see what a terrible state my kitchen would be in. When I got home (still standing! And quite clean, I might add) I sampled the roasted cauliflower and orzo salad with tahini and lemon made that first day, I stopped worrying. Perhaps the tahini was a bit overwhelming, or there was too much lemon, or there could have been more roasted cauliflower, but it was edible, nourishing, and best of all, made from scratch, from a recipe entirely made by Om. Day two went swimmingly as well, and each day built on the previous day and its successes.

Each day, I returned to a delicious-smelling house and a nervous but excited Om. She wanted more recipes, more things to try, and more things to eat, so much so that by the last night of winter term — which, in fact, wasn't the last night of winter term but rather the last night before spring semester started — Om was not only comfortable and ready, but eager to try as many things as possible in the limited amount of time she had... which meant that she made steel cut oats (improvised with chocolate and dried cranberries!), an apple-ginger-rhubarb crisp, and savory whole wheat crepes stuffed with caramelized onions, spinach, and mushrooms. I was in the house for much of the cooking over the final weekend, and what I observed was someone who had a grasp on what was going on — perhaps a bit timid, but knowing that everything would be okay. Perhaps not every step was perfectly efficient, perhaps not how I would do it given the same circumstances, but there was learning, prowess, and enthusiasm in the kitchen along with the ingredients and implements. Now that. Is. Cool.

You go, Om. I think you're gonna be okay.

* True facts: I didn't know how to write a check when I came to college. I had friends that didn't know how to do laundry on their own. I also have friends (case in point: this blog post) who didn't know how to cook. I still have friends who don't know how to drive. Leaving home, for college or anything else, means that you begin to accumulate life skills, but there comes the point that you must decide this is a thing you WILL learn (or it will be thrust upon you uncomfortably). While "Living 101" would make for a great class, you gotta make it your own. It won't stick unless you've got a reason to tack it to your brain.

WOW NOMS! I knew it went well, but oh my goodness those pictures look more than good. I'm pretty sure I can't cook that well. (And this is totally making me want to rectify that.)

You know, I think to really solidify Oms' skills, she should be asked to make a nice meal for your co-workers, or at the very least selected co-workers. Just a suggestion.

@Ida - Sounds like you should join The Need to Feed Bootcamp (patent pending)!

But really though, you can do this. You're already cooking and familiar with a kitchen; Om was starting from abject fear but a love of eating good things. In my mind, the next step in loving to eat is figuring out how to make the things you love.

Should you want tons of recipes from this month (something like 34 of them, I think that's what it was at final count?) that could definitely be arranged.

@Jeff - No. Pestering. Not allowed. But if you ask nicely I will bring you a piece of the final dessert that was made on Sunday.

Those dark chocolate lime cookies sound so good. Adding that recipe to my list of things I need to make ASAP right now.

@Melissa - It's adapted from the OSCA cookbook for a smaller group of nommers... plus we added lime zest and subbed in chunks of chocolate rather than chocolate chips (swear to goodness, it's way better this way). Protip: they're best warm, so we started toasting them to get them back to super-gooey-goodness.

@Ida - Okay! It's my goal to get as many of these as possible up on my food blog this month, but in lieu of that, I might just share our massive Google Doc with you.

Ma'ayan, teach anyone you can lend your kitchen to before you start your own family. After a certain age, kids don't want to spend time in the kitchen with their parents. Just when they are old enough to pick up on those time-saving and intrinsic-to-our-family tricks. When my kids left the house for college, I felt left hanging, thinking 'but...but...I have all these things I was going to show them'. Of course, they were super busy earning those scholarships to go to a good college! Their next years are spent crashing in bed over college breaks and catching up on some serious relaxation; also a good thing, I might add. Turns out, my students love to invent crêpes variations and compose 7-spice-gingerbread, and still I am guessing their parents are good cooks, too. So keep passing it on!NOW is the moment.

Thank you for your comments, Muriel! I'm greatly enjoying this teaching process, and have for quite a while with kids of all ages (including those who are no longer kids in the eyes of society, but rather, giant kids at heart). Even if being in the kitchen becomes uninteresting at some point in the process, having been there at all will stick, as you so beautifully pointed out with the reawakening making treats at a later point in life.

I guess it's all our jobs to introduce cooking to as many folks as possible, through many means beyond just spending time in a kitchen, and know that maybe it doesn't look like an interest now, it'll affect our overall relationship to food in the future.