Coming back to my parents' house always means going through my possessions. Partly because unpacking necessitates making space for things, partly because I love organizing and re-organizing, and partly because I enjoy the reflection that going through my things inspires. Most of my possessions fall into one of three categories: clothes, books, and "paper things," a catch-all category that includes my postcard collection, my journals, maps and brochures from my travels, and nearly every ticket, playbill, program from my time at Oberlin. The "paper things" from four years as an Oberlin student, including my year abroad, fill an entire box, which I keep in my closet. Upon adding this year's haul of tickets and the like, I decided to take a walk down memory lane and revisit some of my favorite concerts from my time at Oberlin. Well, technically they're not all concerts. This chronological list includes a dance performance, an opera, and a musical, but I figure that this is my blog and I get to make the rules. 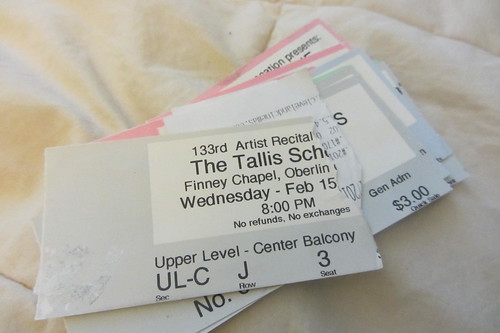 1. The Tallis Scholars - February 2012
Along with Stile Antico, the Tallis Scholars are some of my early music idols, so I was thrilled that I got to see them at Oberlin. Admittedly I don't remember any of the particular pieces they performed at this concert, which is a bit weird. A review I just read of the concert had only one criticism for the group, that the program lacked drama. Even so, it was still very cool to hear the Tallis Scholars sing in person and to find that their blend and sense of ensemble is just as strong live as it is on a recording.

2. Harry and the Potters - April 2012 and February 2013
Something you might not know about me is that I'm a Potterhead. I've read all the books at least five times, some many more than that, seen all the movies at least three times, and possess a near-encyclopedic knowledge of Potter trivia. In preparation for the publications of the Deathly Hallows I read seemingly every fan theory, knitted myself a Gryffindor scarf (a youthful mistake, I'm definitely more of a Ravenclaw), and wore it to a midnight release party at my local bookstore. And I got into Wizard Rock, a genre of music based on the stories and characters of the Harry Potter universe. So when I found out that I had the opportunity to see one of the bands that established the genre, I jumped at it, two years in a row. Both times I saw them, Harry and the Potters put on a great, high-energy show to an incredibly enthusiastic audience.

3. Oberlin Orchestra with Jennifer Koh '97, violin - September 2012
What looms largest in my memory of this concert is Arvo Pärt's Cantus in Memory of Benjamin Britten. I had been a fan of Pärt's choral pieces for a few years, but had never really gotten into his instrumental works. This concert changed that for me. If I remember correctly, I actually cried during the piece and although I'm a pretty regular concert/movie/play crier, I'm very rarely moved that way by instrumental music. I really enjoyed the rest of the concert as well, which was all music from the 20th century.

4. ReEnvision, ReWork, And What?! - May 2013
And What?! is Oberlin's hip hop dance group for women and transfolk. I started going to their performances because some friends from Nothing But Treble were in the group. This performance was particularly great because in addition to a lot of great dancing, it included some spoken reflections from people in the group on their relationships to dancing, hip hop, and their bodies. If I remember correctly, the performance also featured some slam poets and the Umoja Steppers, who only added to the evening. 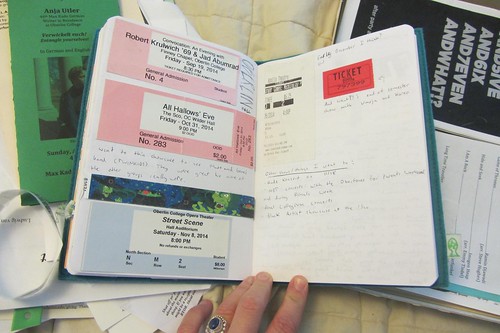 From the brief period when I put tickets from Oberlin into my travel journal, note the Street Scene ticket at the bottom of the left page

5. Street Scene, Oberlin Opera Theater, Hall Auditorium - November 2014
Potentially unpopular opinion: I think Street Scene was the best opera I saw in Oberlin. Why? First, I love opera that plays with non-operatic styles of music and deals with particularly American issues. Street Scene is set outside a Manhattan tenement and includes music by Kurt Weill, a German immigrant to the US known for using jazz and musical theater elements in his operas, and lyrics by Langston Hughes, one of the major writers of the Harlem Renaissance, so it definitely does both of those things. Second, Street Scene is an ensemble show that highlighted the talents of a lot of singers rather than just two or three. Third, the plot is actually interesting and stands up to critical analysis. While I love opera and have enjoyed every opera I've seen at Oberlin, far too many operas have boring or flimsy plots. When an opera has great music and lyrics, interesting roles, and a complex, believable plot, that makes it a winner in my book.

6. Dessa Rose, Oberlin College Theater, Hall Auditorium - February 2015
Most musicals I've seen at Oberlin were put on in smaller theaters, either in the black box or on the main floor of Wilder. Dessa Rose, by Lynn Ahrens and Steven Flaherty, had the advantage of being a mainstage show in Hall. Additionally it had the advantage of a great cast of singers, by far the best of any musical I've seen at Oberlin, and a difficult, engaging story. The musical centers on two woman both based on real historical figures, a young slave named Dessa Rose and a wealthy, white Southerner named Ruth. Over the course of the play, the two become friends but, more importantly, help each other to free themselves from their respective circumstances. The day I saw the show, the cast and crew had a discussion after the performance during which they talked about the rehearsal process, the continued relevance of slave narratives, and the novel by Shirley Anne Williams upon which the musical was based. Overall, I found both the show and the discussion to be really powerful and I'm glad I got to experience them.