There's an irrepressibly affectionate kitten in Oberlin who needs some help. His name is Oliver. Take a look at him.

He's a cheerful, sweet little guy. The rheumy eyes that make him look weepy are the result of a cold currently under treatment. They make him look slightly pathetic, but he doesn't act pathetic in the slightest. I've almost never met a cat with a sunnier disposition, which is impressive considering his history and his injury. The only survivor of a raccoon attack, he has a broken front paw; the leg will almost certainly need to be amputated when he's a little bit older. He's not in any pain, fortunately, as you can see in the video--the nerves seem to be damaged badly enough that he has no sensation there. He goes hobbling around his cage on three legs or using the wrist as a crutch, and barely even seems to notice. He's friendly, happy, eager to play. In fact, he apparently kept trying to play with the vets examining his injuries! They had to put an alcohol-soaked cloth over his nose to make him woozy and still enough that they could listen to his heart. Once they'd examined him, they gave the amputation recommendation, and that, dear readers, is where you come in. 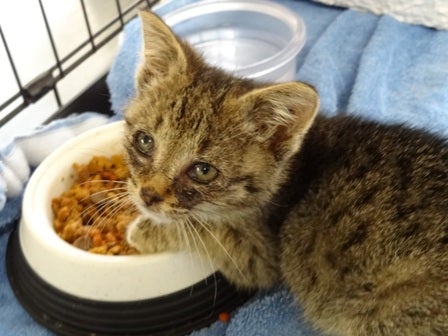 Please, sir, can I have some more?

Oliver is one of the kittens at the Ginko Gallery, a local crafts/art store. The owner, Liz, fosters foundling kittens in a room in the back until they are old enough to be adopted. This fostering program is part of a wider system managed by a local organization called CATSS,
Community Action To Save Strays. The organization spays and neuters feral cats and tries to place tame adults and kittens in good homes, with their basic medical needs covered. However, the organization is funded entirely by donations, and amputation is not part of the "basic medical needs" package. Safely removing Oliver's leg will cost between six and eight hundred dollars, which is not something they're financially able to do at the moment. If his leg isn't amputated, he will have to be put to sleep. So I am asking you, if you're willing and able, to go to the CATSS donation page and make a contribution toward saving Oliver. I don't know how many people read this blog, but if most of you put over even five or ten dollars, it would go a long way.

The man who brought Oliver in, a Russian professor, said not to put him down because of money, and the vet apparently gives CATSS a discount (it would cost $700-$900 otherwise). Still, it's quite a bundle on top of the normal operating expenses of CATSS. Please donate to CATSS to help them, and Oliver, out. 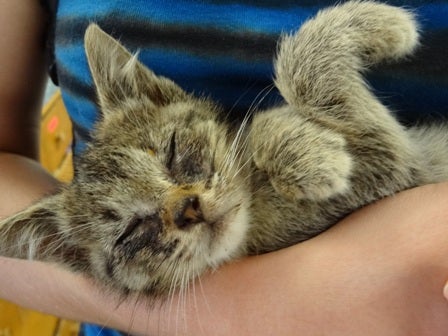 You can see the way his paw is bent here.

I met Oliver because I've been volunteering at the Ginko Gallery, cleaning litterboxes and cages and giving the kittens fresh food and water. I've played with the Ginko kittens many times in my career as an Oberlin student, and I decided that this summer, since I'm going to be around and most other volunteers aren't, I might as well earn my kitty-cuddles. Spending half an hour a day keeping their living quarters clean is well worth it--they're adorable. 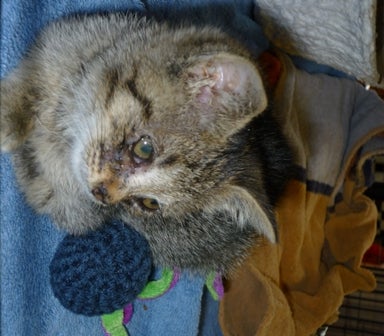 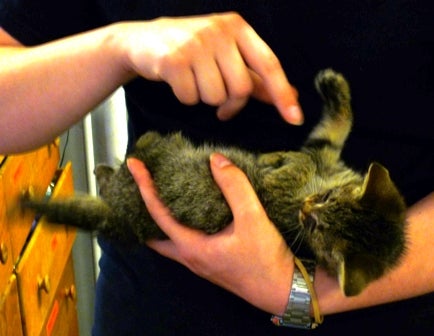 I've also been learning a bit more about why the kittens are there in the first place. CATSS actually has a primary mission of "keeping the local populations of feral cats under control." They do a lot of trap/neuter/release work with the wild adults. Still, they can't get to all the feral cats, and in the springtime they have kittens. CATSS is a volunteer organization, not a shelter; stray cats and kittens get spread out through a network of foster homes, where they live and are socialized until people adopt them. That's where the Ginko Gallery comes in: Liz uses the back room of her store as a foster home. It's only one of many foster homes. Mostly, people keep one or two cats or a litter of kittens in their houses. The Ginko Gallery is special because it's fairly public. People know about the Ginko kittens. Liz encourages people to go in the back and play with them; it keeps them busy and gets them used to being around people, which, in turn, makes them more adoptable. 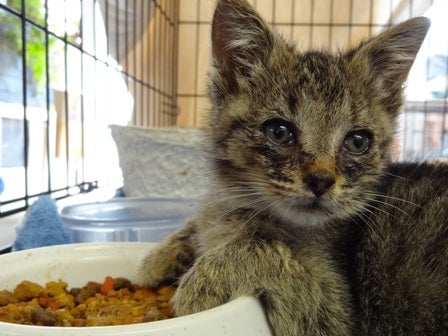 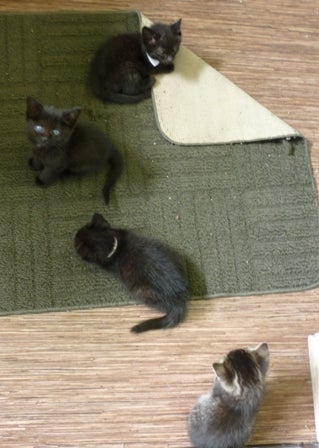 There's a pretty sophisticated setup in that back room. There's an incubator somewhere for truly tiny ones, but that's not necessary right now, fortunately. Someone told me last year that really young kittens need to be handfed every three hours (Liz takes them home and gets up in the middle of the night when she has any that young), and they also need their bottoms wiped with baby wipes to stimulate defecation. Right now there are no infants, but there are four cages. Three of the cages are on counters around the room. The fourth, which is very large and has three levels for the cats to play on, rests on the floor, making up one wall of a small, toy-filled l enclosure where the kittens can romp. This is where people usually go to interact with them. The other walls of this playpen are made of bookcases, a dresser, and the wall. A sliding piece of cardboard, held in place by brackets, serves as a door. The walls are three or four feet high; visitors and volunteers like me need to be careful with the older kittens, who are large enough to jump out. 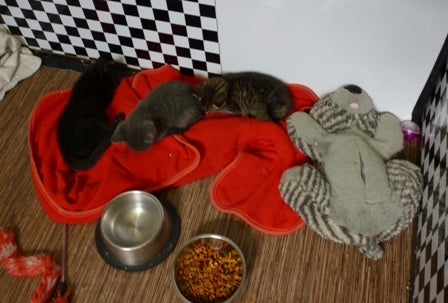 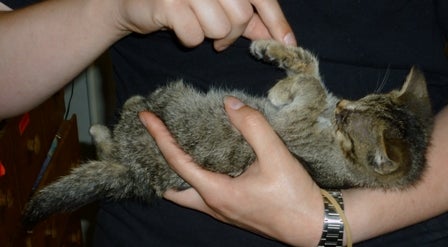 Each litter of kittens gets assigned names with the same letter of the alphabet. They go through the alphabet in order every year, "like naming hurricanes," Liz told me once. (And yes, the fact that Oliver is named Oliver means they're on the 15th litter already!) Often it's not a whole litter, though, just one kitten. For example, Hogan--the oldest and largest kitten in the gallery at the moment--is the only H. There's a family of E's, though: Emily, Emerson, and Eliot. I first saw them in early May, when they were still so young that they looked like gerbils--tiny, with little to no fur on their paws, their ears still folded over. I was tickled to realize that they must all be named after poets (Emily Dickinson, Ralph Waldo Emerson, T.S. Eliot). Last year's E's were Einstein and Edison. Edison's new owner then re-named him Tesla, after Nikola Tesla, the man whose ideas Edison stole. Science jokes! 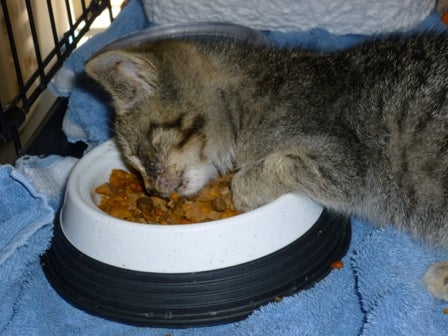 Coming in nearly every day, I'm beginning to get to know many of the kittens. Oliver, of course, is a trooper, happy and playful despite his troubles. Another relatively new arrival, Louisa, is completely different. She must be very young, because she's tiny. The first few days, she was extremely frightened and remained huddled in a ball in a corner of a cage, hissing whenever anyone tried to handle her. Liz wrapped her up in a towel a few times because she seemed to feel more secure that way. Once she had her shots and could interact with others, Liz gave her a roommate. That seems to have helped. She's still not nearly as comfortable as some of the others, but she allows herself to be touched and even purrs when you hold her sometimes. 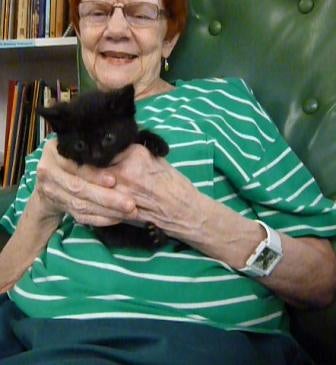 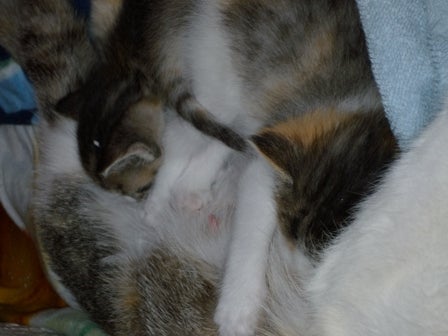 Two days ago, we got a nursing mother.
~ 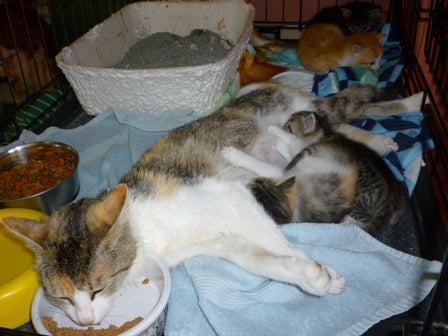 Oliver's pluck and playfulness have made him particularly endearing, but all the kittens that pass through Ginko Gallery are wonderful. I am going to leave you with one more appeal to donate to CATSS to fix strays (these kittens in addition to the adults); to provide food, litter, and shots to all the kittens; and to help with Oliver's operation. Thank you. 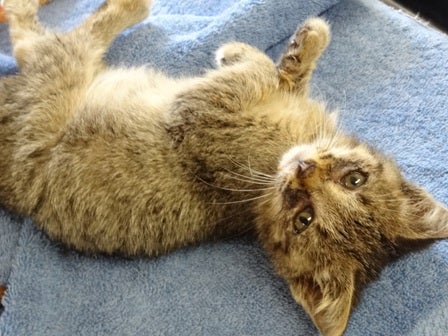 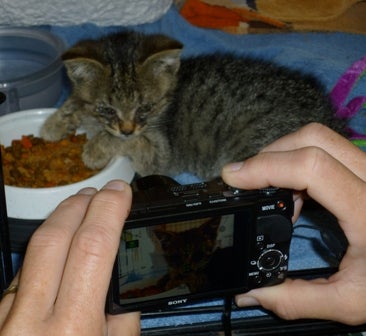 Amazingly enough, Oliver's playfulness seems to have worked as physical therapy. Against all expectations, his paw appears to have healed! The only problem now is whether or not there might be lasting nerve damage--if there is, the leg may still have to go, because he wouldn't realize if he were hurt and any minor trouble could get serious. Liz is going to take him to a different vet to get a second opinion. Thanks to everyone for their concern!