Fall Break: a much needed time in the middle of the semester where Oberlin students (and faculty) get a week off from the stress of academia.

This year I opted to return home to the Bay Area for break. I invited my friend and fellow blogger, Helena, to tag along with me. Prior to this past week, she had never been to the Bay Area. Our week started out a bit rough; we left on Friday and flew from Cleveland to Chicago to Phoenix to Oakland. That's 8 hours on one plane, folks. I don't recommend it.

The first couple of days were spent recovering from the inevitable lack of sleep that occurs during midterms week. Conveniently enough, Active Minds at Oberlin - an organization of which I am a member - organized a sleep week for fall break! Students pledged a particular number of hours to sleep over break and, if they meet or exceed their goal, they'll be entered in a lottery to win a gift card to Slow Train Café. It's a pretty sweet deal, really. I pledged seven hours per night and, over the course of the week, greatly exceeded my goal due to long, restful nights of sleep and naps in the afternoons. I am a great fan of sleep. It's a wonderful thing.

On Sunday, Helena and I opted to bake. We both love baking, as she discussed in a previous post. We baked a chocolate caramel crunch cake and rice krispies treats. The two pictures below are courtesy of my 11-year-old sister, whose photo skills are vastly superior to mine. 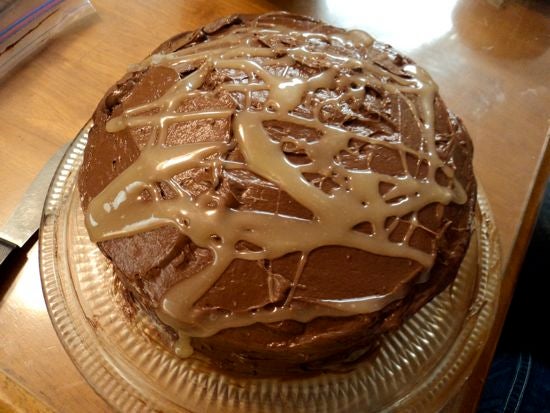 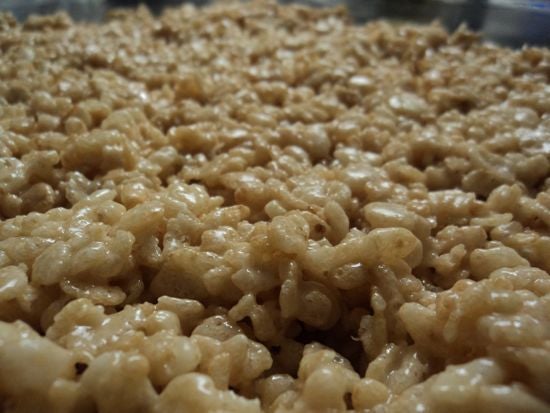 For our first venture outside of my hometown, I decided to give a Helena a taste of some of the tourist aspects of San Francisco. This also gave me an excuse to visit parts of San Francisco that I hadn't been to in years. Specifically, Pier 39, Ghirardelli Square, and the Golden Gate Bridge.

First: Pier 39. If you've never been to San Francisco, it's worth the visit, if only for the amazing views of the Bay. That, and the sea lions. You must see the sea lions. I don't know why, but they're hilariously entertaining. Trust me on this one. 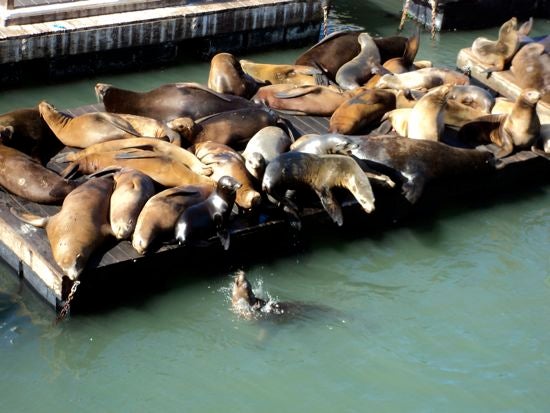 Other than the views, Pier 39 is pretty much a tourist trap. A fun tourist trap, granted, but not really a great taste of authentic San Francisco. Then again, I completely failed at giving Helena an authentic taste of San Francisco, so she'll just have to come visit again. 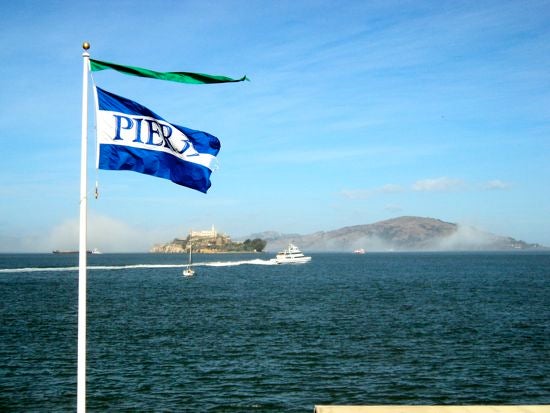 On to Ghirardelli Square! Once again, if you ever find yourself in San Francisco, go. Considering that it was in the middle of the day on Monday, there weren't many people there, but it was fun nonetheless. We picked up some presents for Ma'ayan and Brandi, among others, and we tasted the glory of various kinds of chocolate. If you've never had Ghirardelli chocolate, you're seriously missing out. 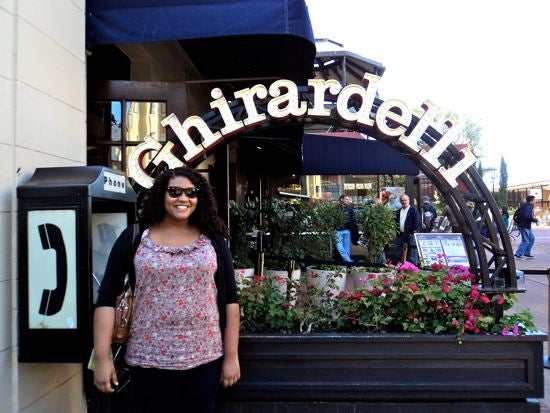 Next, every tourist's obligatory visit to the Golden Gate Bridge. Now, I live in the eastern part of the Bay Area, so on the rare occasions that I have to drive into the city, I always use the Bay Bridge. 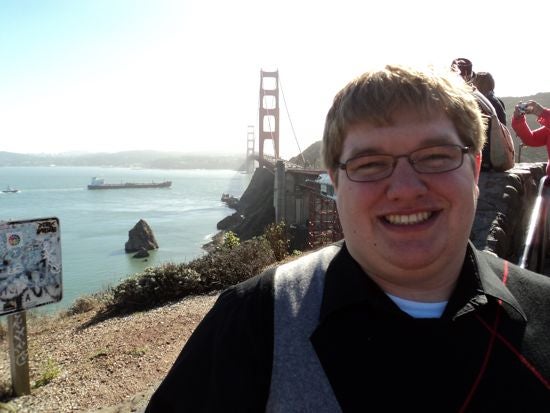 That was pretty much our first day of adventures. After this day, the Giants and the Rangers made it to the World Series. Why is this important to point out? Well, I'm from the Bay and a diehard Giants fan - my friend Carrie and I have been watching all of the postseason games in a lounge in one of the dorms - and Helena is from Dallas, home of the Texas Rangers. Cue a (rather mild) rivalry. We basically just tease each other, so it's really no big deal. Up until today, it was more of me teasing Helena because her team had yet to win a game in the World Series, but the Rangers won 4-2 tonight, so they're gaining ground. These games have been ridiculous, but so much fun to watch.

Also, fun facts for those of you who haven't been following the World Series or baseball at all:

It's really quite exciting. If you haven't been watching the World Series, watch this video. Even at 84, Tony Bennett still has it. Classic.

On Thursday, we ventured to my high school - shout out to Las Lomas High - to give a presentation as part of the Admissions Office's "Take Oberlin Home" program. This program gives students the opportunity to return to their high school and talk about the awesomeness that is Oberlin. Last year I strong-armed Tom - the admissions counselor who used to read from Northern California and who read my application - into visiting my high school. Only one person showed up. This year, four students showed up! Helena and I talked with them for about 45 minutes or so. My high school hasn't sent anyone to Oberlin since me, so I'm hoping that someone will come again soon!

On Friday, we had one last journey. Our first stop was Muir Woods - a peaceful oasis of redwood forest just north of San Francisco. It was stunningly beautiful. There's something peaceful about a forest that you can't really get anywhere else. After Muir Woods we went to Muir Beach - a small, but awe-inspiring beach just south of Muir Woods. Both Muir Woods and Muir Beach are a must-visit. One of my favorite things about the Bay Area is that I have mountains, beaches, forests, and cities all within an hour of my home. Also, Helena decided to bring Oberlin to Muir Beach (see the picture below). 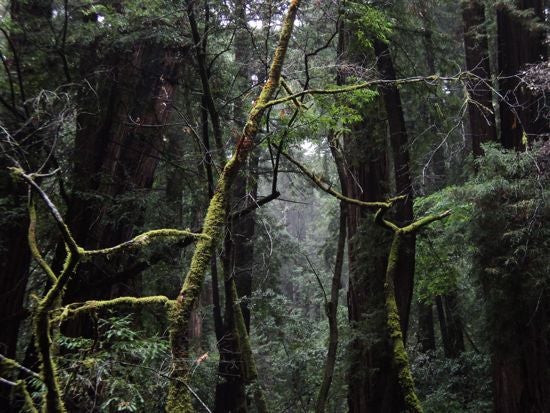 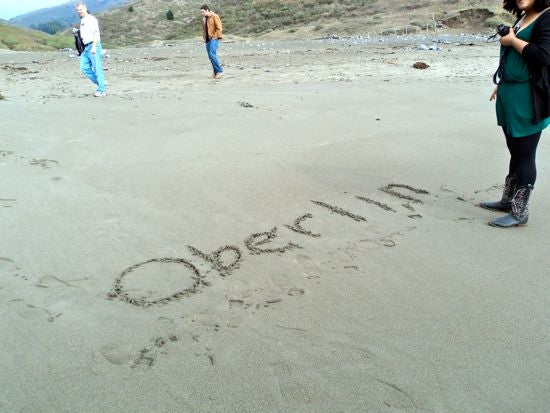 The last stop on our visit was Telegraph Avenue in Berkeley. Helena has been waiting to go to Amoeba Music since she was about 12 or 13, so she was excited. She was stunned into silence. 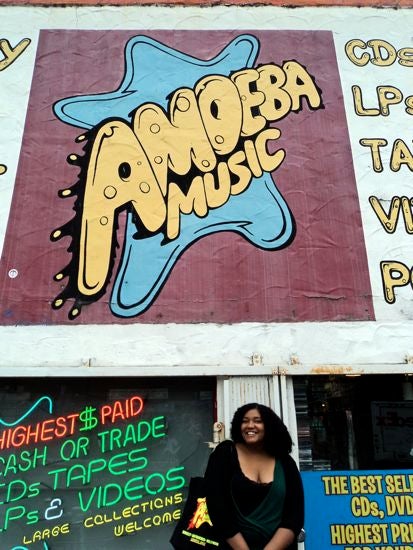 Fall break was fantastic. Now I'm back in Oberlin, relaxed, rested, and energized for the second half of the semester!

As I said in my first post, I'm going to try to end all of my posts with a quote. This time it's relevant to this post:

"When you get tired of walking around San Francisco, you can always lean against it." - Unknown

Aughhhh I am so jealous. I want to be in the Bay Area all the time. I want sourdough bread bowls filled with clam chowder and I want Cheeseboard Pizza from Berkeley and I want weeks upon weeks to explore everything everywhere.

Oh well, I'll head that way soon. Thanks for the photos to tide me over til then.

MY PICTURES!!! I know, they're awesome! Getting ready for HALLOWEEN!! My costume is awesome!

Best fall break EVER. Thanks, Patrick!

You guys look like you had so much fun, and I'm glad you're keeping up your baking skills for HT Pattycakes. I made everyone in my office drool (after a full, North Philly Colombian lunch, no less) over pictures of that cake. Ominers.