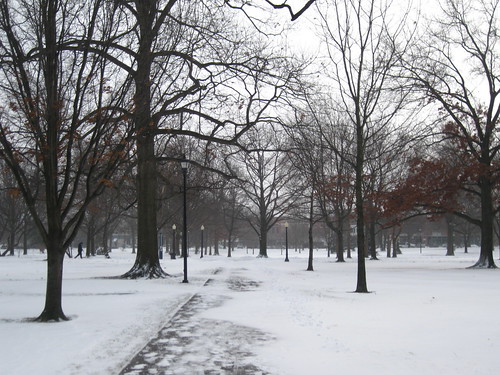 It's mid-January, which means two things: that high school seniors applying to college RD have officially begun the long, long wait and that Winter Term is in full swing. My official winter term project is the Yarn to Garment class, about which the lovely Sarah has already written a pretty comprehensive guest post. In case you're too lazy to navigate away from this page (I totally understand), I will give you a quick summary. The class is basically a crash-course on learning how to weave and sew a garment - we come up with a design, buy the yarn, set up the looms, weave, and do the sewing with a fair amount of help from the instructor, Betsy Bruce, but by ourselves whenever possible. 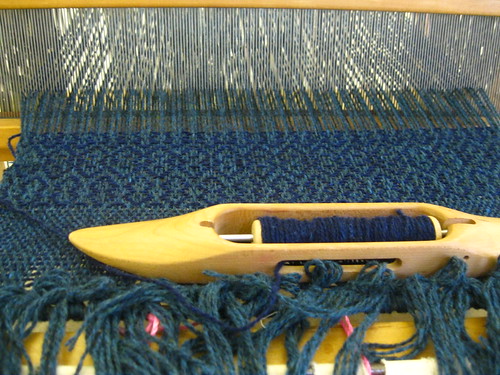 The very beginning of my weaving.

In past years, the class took a trip to New York and New England to visit some weaving studios and buy yarn, but this year, we just ordered the yarn online and made a brief visit to Kent State's textile and fashion design program. I'm a pretty experienced knitter and a passable sewer (read: I can sew in a straight line), but until this week, I had never used a full-sized loom before. The prep work was pretty time-consuming and honestly, a bit tedious, but now that I've begun weaving, I imagine that it will be pretty smooth sailing until I get to the sewing. Even though it is a weaving class, I've decided to include some knitted elements in the design, which has been a lot of fun for me, since I've never really designed anything before.

But just in case you did click over to Sarah's post, I don't want to bore you. Luckily for you, I have some sub-projects in addition to my weaving class. The first sub-project is perhaps the least exciting, over winter break, I decided that I would swim laps at Carr Pool (the official title is too funny not to use) four times a week. So far, I've kept that up pretty well; the only thing that makes it tough is that there are only three rec swim times during the week. The first is from six to eight in the morning (I don't think I need to explain why this is a problem), the second is from twelve to two and my class starts at one, and the third one is right around dinner time, not to mention that it's the shift during which I usually sign up to work. Even so, between coming to class slightly late and swimming on the weekends, I've somehow managed to make it work.

Since I didn't have much time to read for pleasure during the semester, my second winter term sub-project is to read more books. I've only finished two books during winter term, Crossing the BLVD by Warren Lehrer and Judith Sloan and The Road by Cormac McCarthy, but I'm currently reading One Hundred Years of Solitude by Gabriel García Márquez and I have a few more books on deck. To be honest, I haven't taken as much time to read as I had originally intended, but that probably has a lot to do with my third winter term sub-goal, not to mention the fact that I finally caved and watched the full not-yet-released in the United States second season of Downton Abbey.

That leads me right to the movie list, my hall's collective winter term sub-goal. A short while before reading period, a bunch of us from my hall decided that winter term would be an ideal time to watch a bunch of movies since a fair amount of us would still be around and our academic obligations would be minimal. After several conversations about what movies we should watch, we realized pretty quickly that if we didn't keep track of the movies in writing, we would end up not watching anything. Thus, the list was born. 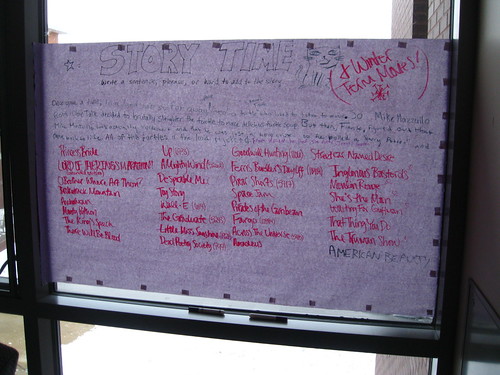 Obviously our collective story-writing didn't go so well, but this paper was perfect for our list!

Currently, the list comes in at 32 movies, not to mention the Lord of the Rings marathon that we've planned for this weekend, but it's still growing. Even as we crossed movies off, we continued to add more, thus, we transferred our list from a humble 8 ½" x 11" piece of paper to what you can see above. As of last night, we've watched seven movies. We watched Inglorious Basterds, Moulin Rouge, The Truman Show, She's the Man, Waiting for Guffman and Little Miss Sunshine six nights in a row, then took a break for the weekend and resumed yesterday with Dead Poets Society. I don't watch a lot of movies in my spare time, so this has been a good way for me to watch movies I hadn't seen before, re-watch old favorites, and finally finish watching movies that I had only seen parts of.

If you can believe it, I have a fourth winter term sub-goal (as if you couldn't already tell from the blogs, we Obies are over-achievers). That goal relates directly to my second New Year's resolution, the one that I forgot to mention in my last post, which is to write more. I started using the website 750.com at the end of November. The aim of the website is to motivate the user to write 750 words, or approximately three pages, a day. What with the end of the semester and Christmas break throwing off my schedule, I had trouble keeping up a daily writing habit, but I resolved to try to amend that during winter term. Alas, I've already missed a few days this month. My habit of writing right before bed ended up biting me in the butt; because of all the movies, I've been going to bed after midnight most days, and I haven't quite figured out how to adjust my writing schedule accordingly. Even so, I have been writing more consistently than I ever have before, so I guess that my resolution/sub-goal has been a moderate success.

Even with all of these (admittedly modest) goals and my job at the pool, I've still had a fair amount of free time to spend with friends. In the past week, my hall-mates and I have gone to a swim meet, been to Chabad dinner, dyed the tips of my hair purple, played Trivial Pursuit Junior at Slow Train, and explored Snowberlin on multiple occasions - not to mention all of the less-exciting things we've done, such as grocery shopping and cooking. 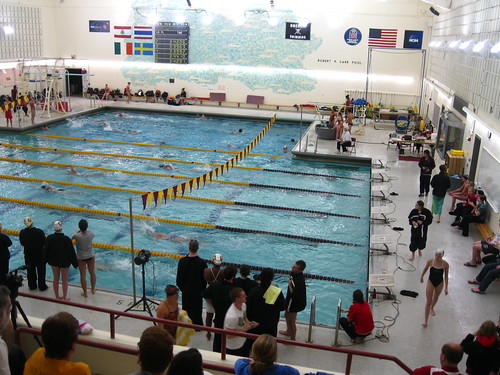 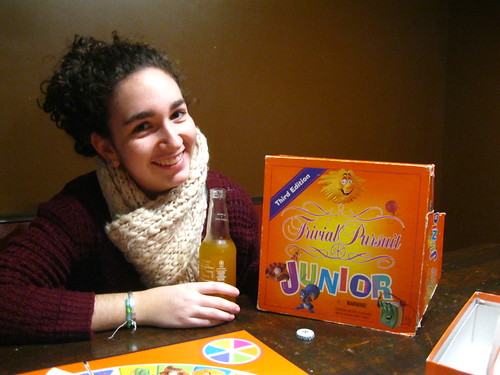 I highly recommend making up your own rules to this game. 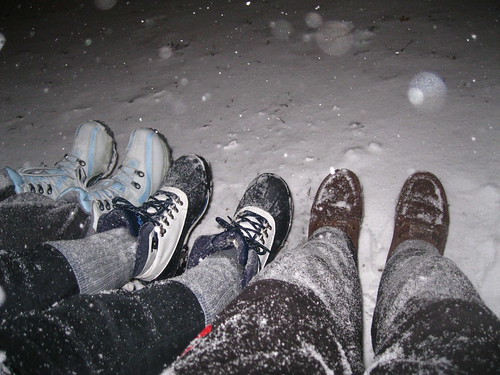 All in all, I'd say that winter term has been pretty great so far. Now everyone go watch this scene from Waiting for Guffman, I guarantee that it will either put you in high spirits and/or confuse you so much that you feel obligated to watch the movie. Happy winter term!

I think you should change your major to Unparalleled Writing Skills with a concentration in Blogs. Perhaps you can pick up a few minors in Craftiness and Ultimate Win too. This post was a joy to read :)

I totally read One Hundred Years of Solitude on my flights home after finals. We should talk about it over tea in two weeks when I get back. Also, go you! Your winter term sounds splendid!

I'd LOVE to see your movie list. Can you type it up?

Amy: Thanks, chica. You should probably pick up a major in Sweetness with a concentration in Complementing.

Ida: Sounds great! By that time, I will probably have finished the book.

So, how many of the movies have you and your Kahnnies managed to finish this month?

The end count was 16, plus one or two that they watched while I was at home during dead week.

So cool you tried out the 750 word writing thing! I've heard about it but never tried it myself... I'd love to hear how it worked out for you, and if you think your writing improved!