I haven't tracked down much in the line of jobs. I'm not alone there, either. Last weekend, I had a few friends over to watch Battlestar Galactica. Together, we represented Oberlin, Willamette, Occidental, and Harvey Mudd--some of the top colleges in the country--and not one of us had a real job. (Actually, one of them is on the catering staff at Point Defiance Zoo, but they only have three catering events this month and none of them had taken place yet.) They're basically doing what I'm doing: hitting up friends and neighbors for odd jobs.

We had a good time, though. It was great to see them again and compare crazy college stories. I've been friends with two of them since second grade and worked with all of them on an underground school newspaper in our senior year of high school. Everybody, myself included, seems a bit more relaxed and comfortable now; I think college has been good for all of us. It smooths away some of the raw edges, the self-consciousness, the defensiveness, and the chip on the shoulder, leaving us more purely ourselves. Social posturing has become far less necessary (or maybe just subtler). In any case, I think everyone had fun and we're going to do something similar again.

I have had a few jobs in the past weeks. I'm helping one of my dad's co-workers with a batch of chores: painting wire fences, cleaning and painting a workshop, helping with gardening, scrubbing smoke-stains off the ceiling near the fireplace, etc. It's probably going to take most of the summer, which is great. Last weekend, I kicked it all off by power-washing a garden wall, the driveway, and a long stretch of the sidewalk. Power-washing, I learned, is fun (and highly effective; the driveway transformed magically from almost-black to creamy white). The spray gun (for want of a better name) has a nice heft to it. It is the uber-Super Soaker that you dreamed of as a child. Your foe is the black moss/algae scum on the walls in front of you, the ground-in dirt on the pavement beneath your feet. You alone can triumph here: only your thorough, close-quarters blasting will cleanse the world of this menace!

Eventually, though your spirits are still high, you realize it's also wet, dirty work: the spray rebounds off the wall and gets on your face, clothes, and hair, along with splashes of mud and the occasional particle of moss; when you're hosing down the sidewalk, your sneakers get soaked; eventually, water seeps through even the raincoat and rain-pants your employer has lent you. If you are in Washington, chances are good it will start to rain, but it won't make much difference. By the end, you hose down your feet, so that your shoes are soggy but at least clean. Mud has gotten through them somehow, so that your socks are unsalvageable. (Fortunately, you wore old ones for this very eventuality.) You arrive home feeling accomplished, exhausted, and in dire need of a long, hot shower.

I'm going to be doing yardwork and painting at home, too, my parents assure me. So far I haven't been doing many chore-type things, however: the big project is cleaning out my closet, the repository of countless notebooks, scrolls (yes, scrolls), stuffed animals, school projects, photographs, letters and cards, and other memorabilia packed in a series of boxes. It was only a few years ago that I realized I could also use my closet for storing clothes.

Going through my old things is actually a lot of fun. I've discovered stories I wrote ages ago, report cards from eighth grade, "best work portfolios" from middle school, notes from a friend I've known since we were both four years old . . . . It is a testament to my willpower that I'm managing to purge a lot of it. Most of it, of course, still holds some kind of sentimental value for me, so I'm taking photographs of it before I recycle it all.

It's kind of like an anthropological exploration into my past. I'm posting pictures because it's just too much fun.

I could not spell to save my life until about fourth grade. These are much earlier samples, but my improvement was painfully slow.

Below are examples of just how inconsistent my spelling was. I found three different ways to misspell the word "official." (P.P.P., by the way, was a secret organization, based on Calvin and Hobbes' G.R.O.S.S., that I invented to playfully torment my parents. I don't think I ever did anything but scheme, however.) 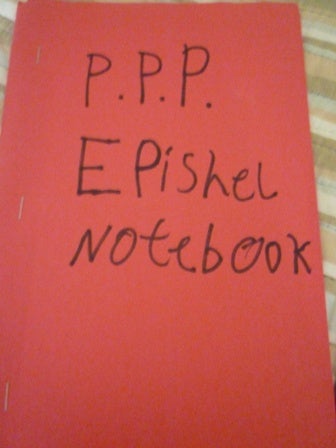 Here is one of the diabolical plans recorded in one of these "epishel" notebooks. The top says, "Attack D (Daddy). Put salt in coffee instead of sugar. It will be fun. Yes!" (I must not have known that Dad doesn't take sugar in his coffee.) The second part reads, "Run in and cry, 'change your pants!'" I cannot now recall why this was such a stinging attack, but I'm sure that at the time it was well-reasoned, cunning, and designed to bite to the quick. 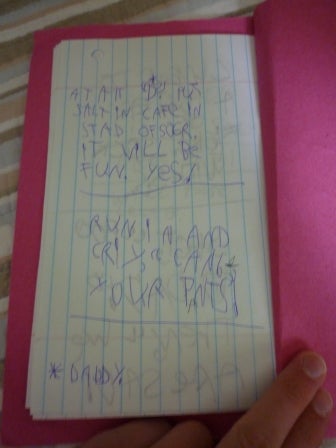 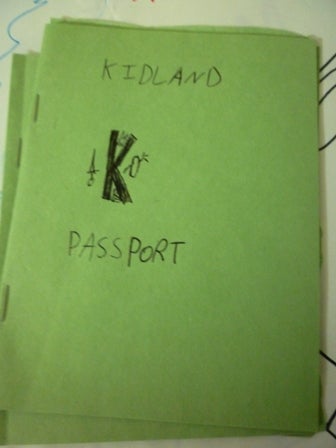 One summer, I decided to invent a country and give it a post office, customs office, etc. I made all the official documents for entering and exiting it, tourist brochures, and so on. This may be the one time in the history of the world that bureaucracy was fun. Its motto was "Fiction, Fantasy, Cats, Humor, and Drama," all of which are represented on the Great Seal. (Humor is a toilet nestled at the bottom of the K.) 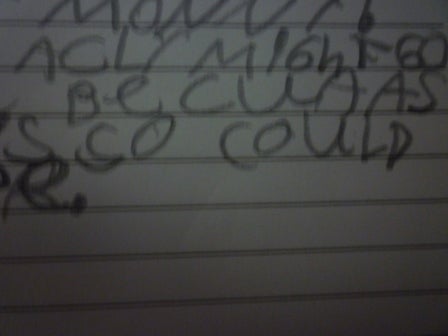 Yet more atrocious spelling! This is part of a sentence that reads, in translation, "We might actually go home because it is so cold here." Apparently "actually" is vowels-optional. However, my personal favorite is the "becuaas." At least I knew there was a 'u'!

Does anyone else have or remember Lion King trading cards? I think you got them with Happy Meals or something. Mostly I got mine from an aunt and uncle who knew I loved the movie.

Tune in next week for more photos!