I am, by nature, a reflective person; holidays, in particular, accentuate that aspect of myself, and Thanksgiving has been no exception. Over the past four years, it's inevitably made think about what a big part of these college years has been about developing my identity as an independent young adult.

Freshman year, I spent Turkey day here, enjoying Campus Dining Services' Thanksgiving meal with some other Obies, which was - and, from what I hear, continues to be - a fancy, tasty affair. Sophomore year, I road-tripped it to my then-boyfriend's home to celebrate, an all-day cooking and baking and eating extravaganza that remains one of my best holiday memories of my young life. Junior year, I was studying abroad in Amsterdam; without family around, my fellow program-mates and I had a big potluck with good music and wine and conversation. (The Facebook photo album documenting the affair is entitled "we're in our twenties now...dinner party, anyone?") Although we were all a little homesick that day, there is something really special about the evolving sense of family you develop with the people you meet in your life after leaving home.

After fall break each October, during which a lot of people opt to go home for a week, there's always a buzz around campus among the freshmen, processing with each other their first time returning home after being away for their first few months of college - and the consensus is often that returning to Oberlin feels just as much like "coming home" as the real thing, if not more so. I've certainly felt that way with many of the people I've met at Oberlin - friends who have been there with me through all the changes that college has wrought within me, with whom I have traveled all over the country and world, with whom I have grown and changed, and who will continue to be a part of my life long after we all graduate.

I've also been incredibly lucky to have cultivated yet another "family away from home" in my co-workers from Dick's Sporting Goods in Elyria. I started working there about nine months ago, and a great deal of friendship has bloomed under its wing. There are simple ways in which I've bonded with them - getting drinks after work, having long-winded conversations about the diversity of life experiences we've had, watching Cleveland sports games over Buffalo Wild Wings, going to the Lorain county fair together over the summer, inviting them out to Oberlin for $2 movies at the Apollo, going to my fellow footwear associate Quinn's comedy and improv shows...Thanksgiving this year, however, brought things to a whole new level. 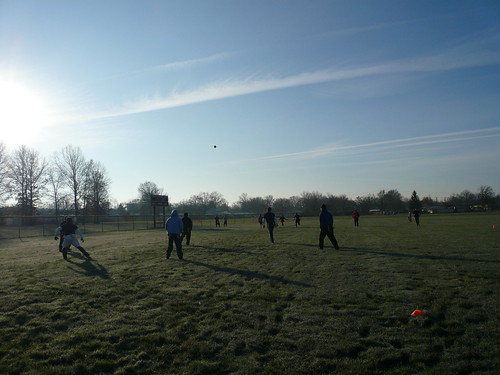 We organized a Turkey Bowl flag football game for Thursday morning, and despite the seasonal Ohio cold, it turned out to be a gorgeous day. I'd never played a game of football in my life before, but it felt great to run around with all my co-workers for a few hours in the morning sun. We played hard, huffed and puffed in the frost, laughed until our stomachs hurt - and most all were groaning with soreness at 5 a.m. the next day when Dick's opened for business on Black Friday! (But our manager is good to us; there was a steady supply of coffee and snacks for us the whole epic shopping day long.)

For T-day afternoon, Quinn invited me to join him at his friend's family's Thanksgiving meal in another Cleveland suburb. It was a feast in every sense of the word, and an honor to be welcomed into a stranger's home for the holiday. Before dinner, we all went around the table and talked about what we were thankful for - though I can think of a lot I'm thankful for this year, the first thing that came to mind was just how lucky I felt to be around good people that afternoon. My biological family may be spread all over the world - Kansas, Colorado, California, The Netherlands, England, etc. - but there are people right here, hundreds of miles from any of those places, that make me feel safe and loved and happy, too.

(That's me reppin' my second hometown in the white Oberlin shirt and, obviously, busting up whatever gender roles I can by holding my own in a game of football with mostly guys.) 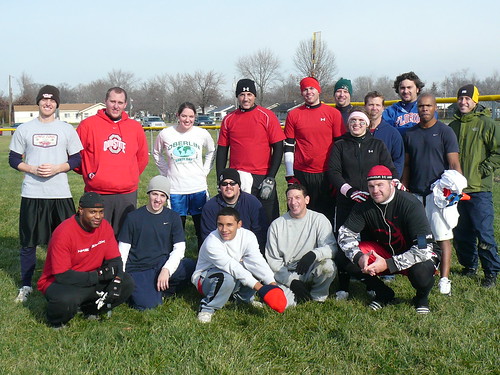 So, bottom line: College is a time of transitions. Sometimes they're scary. For the most part, though, they're pretty darn exciting - and full of a lot of love, new friendships, and fantastic food.

Thanks for sharing this Yitka! Reflecting on Thanksgivings past is an interesting way of looking at how we've changed, and grown, in the past few years. Great entry!

Thanks for the comment, Shari. I don't know how it always happens, but it really is without fail that this time of year, my journal entries start getting way long, rambling, and reflective...