The hard part of Finals is ... finishing them.

I completed my Ancient Sexuality paper just in time. In my haste to take a nap, I sent a "Yay, here you go!" email to Professor-Captain Kirk Ormand, but forgot to include the attachment with the actual paper. It had been a long night.

I've spent the past few days on the paper, focused on seductive lyric poetry in Greece and Rome. I argued that the poems weren't seductive at all. Generally, the poems demeaned the person they were hoping to woo. The pieces, in my view, were intended for something else entirely: asserting the masculinity of the narrator/author. The paper was called "Boyfriend Training."

I muddled through the Astronomy final, nailing the math problems, but totally forgetting how to find supernovas and any useful data about quasars. I'm still working on finished David's paper. The day after the Sexuality paper, I worked on the drama paper, but for some reason, I didn't save it at the end of the night. I lost about 4 hours of work. Pleasantly, I also found that when I opened the document, my paper was awful. Really, quite awful. So I spent the past 5 hours trying to make the paper more coherent.

And now, I'm done! I've been to the library, bought my parents Christmas presents, worked out at the gym for a really long time, gotten dinner with my grandmother, and slept.

Overall, I fought really well in the War Against Procrastination, battling the axis of academic apathy:
1. Friends
2. Webcomics
3. Events

Friends
These are the Clytemnestra of my life, the sweet dangers who may lead to academic disabling. Pretty, kind, intelligent, bearing tasty things and good ideas. We all cluster in the academic commons of the library, cozy ourselves and chat. I must be wary of them.

Events
Around the end of the year, most folks have their recitals, final projects, and all sorts of ridiculous study breaks. Some days, the "Study Breaks" start at 10:00AM and end at midnight. If you attended all, you'd be in trouble. I focused on a few: a three-band show, the Dead Hear Footsteps (WOBC radio noir drama), the Storytelling EXCO's final show, and Artwalk.

Artwalk is one of my favorite events at Oberlin. The art students of all levels and mediums take over studios, the classrooms, and the hallways of the building. Any empty space is snatched up and covered with photos, sculpture, or paintings. Hallways, furniture, doorways... last year, there was a sculpted boat made of passports sitting between two of the art wings. It's free, open to the public, and packed.

Some of my favorites:
Seth's photos. Seth is one of my coworkers for Academic Ambassadors and his project was perfect. Obies are not very... formal people, in action or in decor. We wear comfy clothes. We're pretty chill. So when there's someone who behaves in a more formal manner, it's pretty interesting. Seth's pieces explored his own formalism, with two black and white photos selected from his set. In both, he was dressed like a young power-broker, tied to a chair or wearing a dunce cap.

I asked my friend Izzie if she had any pieces for Artwalk (she's an art major), and she ducked her head and said, "Yeah, but it's no big deal. Don't go for me." Izzie is modest. And highly ridiculous as her piece was beautiful--a dual-layered piece using transparency sheet with the physical form and an underlayer with the skeletal structure, shaded to show a sense of emptiness. Still, Izzie was better than Liz, who forgot to tell me that she had a mixed-narrative piece up--a giant mural with a woman waiting on a road, Wyeth-esque, with a story she told playing on an old walkman.

Many of the pieces were interactive games. A crowd favorite was the Cat Chess Board: 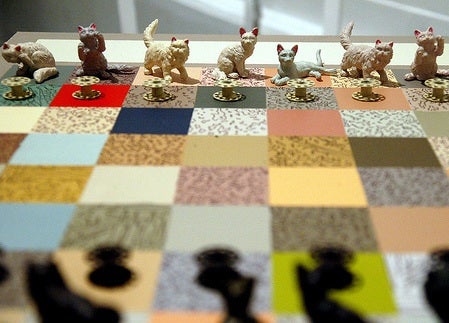 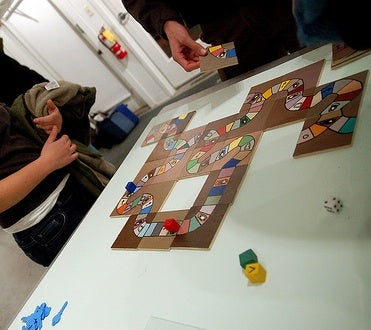 Speaking of Anna, she also had a piece up that gorgeously blended about 10 different cartooning styles, from Ramona Quimby to Eloise. I got lost in it for a while. 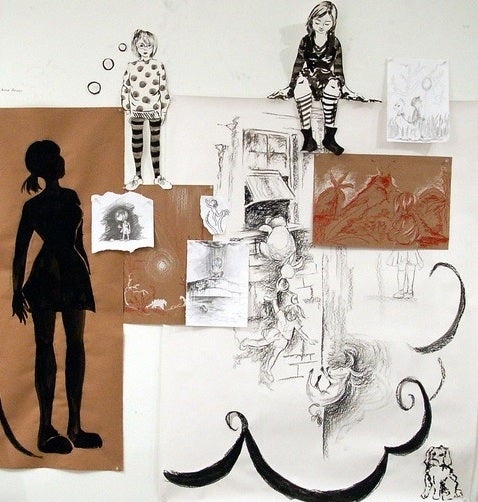 Besides this, there were a wall of faces, an installation piece on the divide between Palestine and Israel, colored vials, comics (one by Nick Wirtz, a design/artist/video genius). Antonio built a tank.

The work was so imaginative--being able to see it really helped me through the tedium of Finals.

Afterwards, I went to the Cat and danced to OSTEEL, Oberlin's awesome steel drum band. 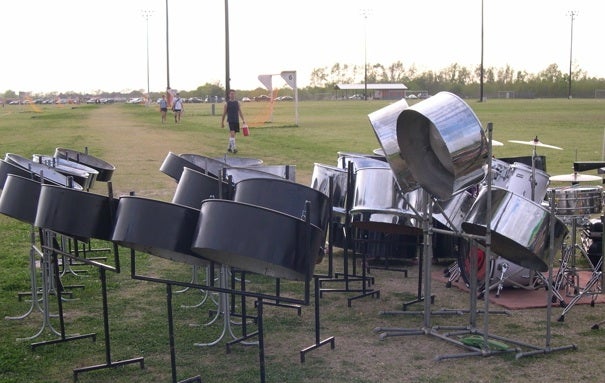 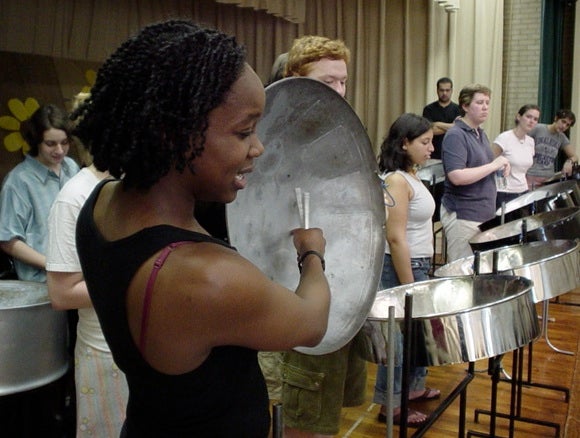 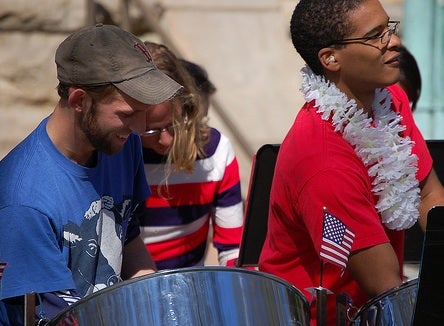