I think English is missing a few words for family. I am glad for the one that describes those of my flesh and blood, who love me, nurture me, fight with me and tolerate my freegan quirks. I am glad that it stretches to the web of my kin cast farther over the earth, who send cookies, love and pleas for more blog posts through the continental ether to Ohio. I love my family and I like to refer to them that way. But I need a word that spans millennia. I need to talk about my brothers and sisters who populate the biosphere, who live lives beyond human knowing and become sediment when they die. I need to talk about my ancestors, and the distant relatives who keep the old ways: the sharks, the coelocanth, the equisetum. I need to talk about my cousins the osprey in a way that won't make their executioners laugh. I need a word that goes all the way back to the root of the family tree.

And I need some more prosaic ones. How about a person-noun for camaraderie? My summer coworkers and I are only camp counselors, but we work together session by session building something worth having: a place for kids to grow, to play, to get dirty and take risks and learn to love the woods. I want a word that's closer than coworker and more precise than friend. I want a word for campers that I want to see grow, for the feeling that comes over me when I see them as if running in a blur of years. Last month one of my favorite campers rode by on our director's bike, and I could see him riding it at fifteen, a teenage helper bringing snack, and then at twenty, a counselor himself. I can't put names or faces here, but I'll remember them long after the campers have grown up. I want them to stay at Bushy Hill.

I want to tell you ("readers" is a good word) a little bit about it. I'm pretty sure I'm not going back next year — I want to tend the garden through a whole growing season — and the thought makes me ache. I could write a pretty good soft-rock country song about days at Bushy Hill, complete with frog catching, rope swinging, s'more roasting and camp song singing. I would throw in the charming fragments that make us special. We paint our faces with charcoal paste and make spoons by burning coals into their hollows. Some of us prefer bow drill sets to matches. We build shelters to stay in the rain, instead of to stay out of it, and lose Crocs while wading in mud pits three feet deep. 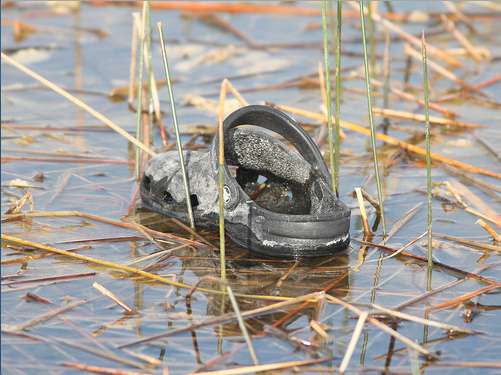 Found one! I actually found this picture online (licensed under Creative Commons 2.0). After my own Croc-finding adventures, I was usually too muddy to handle a camera.

Bushy Hill isn't rigidly structured: we have three hours of field group time in the morning to use as we please, followed by swim, snack and entertainment. We can amble to Berry Berry Island if we want to, or book it to Lookout Point in time to cook lunch over an open fire. Last Monday my field group and I went to Lost Pond, detouring through the swamp in order to achieve the requisite lostness. We skirted ferns as tall as my campers and tiptoed around Jack-in-the-Pulpit. Everyone found something beautiful - a feather, a moth, a ridiculous orange fungus. At the top of a hill overlooking the pond, some fifty paces from the trail, we found a square of standing stones marking the cardinal directions. The square was built by one of my own mentors, Erik, who probably doesn't know how much he changed my life by teaching me what sassafras looks like and how it feels to be listened to.1 When my field group stumbled upon the stones, I felt like the heir to a priceless fortune. I need a word for that.

An hour later, we built a fire in a ring of stones to roast apples, sandwiches and cicadas.2 We missed swim time to take an all-camp photo, so instead of snack with the rest of the camp, we took off to jump off the rope swing into the lake. That's the kind of freedom we have.3 Imagine if the world were like that: "It's hot and I just had a long meeting - time for a swim!" Productivity would drop precipitously. We would make joy instead. 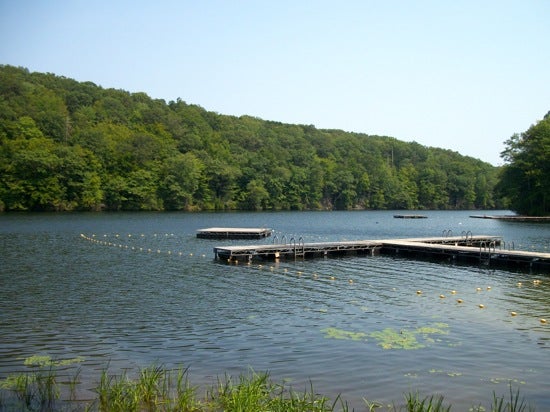 A view of the swimming area. No picture comes close to catching the way the sunlight falls through leaves or the way the light from the lake plays on kids' faces, but I hope you have experienced these things for yourself.

Bushy Hill is one of the places that makes me long most keenly for new words. So is Oberlin. "Alumni" is a pretty decent word for the loose network of former Obies cooked in the same Crockpot. But I want a few more. One for the small league of groundskeepers who leave their handprints in the soil of the AJLC, who plant seeds and cradle seedlings in the same clay soil, tend fruit trees that will be here longer than any one of us. I want a word for the people I entrust with the lives of the chickens I love. Co-keepers is a good approximation. But I want a better word than "boss" for Sean, the facility manager of the AJLC, who spent whole weekends shoveling layer upon layer of anaerobic waste off the garden.4 Anaerobic waste is not something you shovel for fun.

I like the word classmates, despite all the shades of meaning it can swallow, but I want one for the people who stay up late with you, long past dinner and then past midnight, tracing out chemical formulae or the evolutionary history of plants. I want a word for the people you would fail exams without. I need one better than TA, which conjures up images of fumbling grad students. My TAs have not been not substitutes for busy profs. They are teachers in their own right, passionate and personable, as ready to learn and teach as the best professors. I think "teacher" is close enough.

But what about all the teachers who don't talk? The way sycamore bark leaves shadows of itself, tracing a puzzle into the sunlight, the pattern stretching. The soulful eyes of a Sicilian donkey. The moments of grace that teach me to be patient, to slow my steps, to walk. "Teacher" isn't good enough for a true native sycamore tree. "Brother" is more like it. 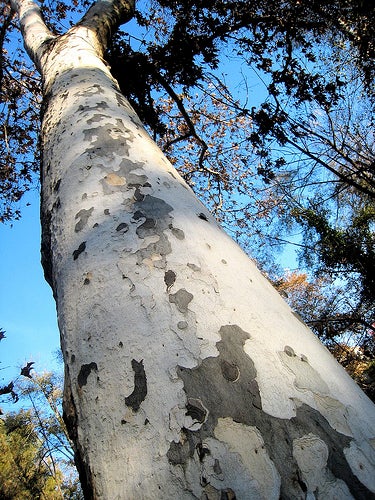 This picture belongs to Alan Levine and is licensed under CC 2.0.

"OSCAns" and "Harkies" are decent nouns, if a little specific. I use "coopmates"; it's close enough, despite the hyphenation headaches. I thought I loved OSCA as much as I ever could. I was wrong: co-op-less,5 I'm completely adrift, and I appreciate Harkness and its denizens even more than I did when I was one of them. Harkies do feel like a sort of very large, very strange, slightly dysfunctional extended family. We clean up each other's messes (or refuse to) and hash out our differences over long dinner discussions. We leave each other's misplaced stuff alone. We freely borrow what we need: screwdrivers, duct tape, hamster food, affection. We scrawl chalk on the walls and have sleepovers for no reason and know each other's dietary needs.

It's such a transient connection, a bond of proximity, but then, so are hydrogen bonds. Hydrogen bonds are weak alone, but they thread all of life together. Love, in college, is a lot like that. Four years feels like a millisecond. Four years feels like centuries. These tenuous, fluctuating bonds bind us like cytosol inside a membrane of red brick. And the cell that holds us, a single population, stretches to meet humanity: a tip of a leaf on the tree of life.

How do you talk about that? There aren't enough words. Maybe the lack of them is a hint that talking won't cut it. Small actions help. Scrubbing the pans someone left in the pot sink; suffering native weeds to grow in the garden; taking a stray praying mantis outside. These things are how I say "family."

What about you, readers? What words do you need? And what do you say instead?

[1]I was thoroughly listened to throughout my childhood, no doubt with patience, wisdom and grace, by my parents, relatives, and teachers. But it's only with hindsight that I appreciate those closest to me. At the time, I felt isolated and invisible, and Erik listened to me with his whole attention. I became a counselor to listen to kids that way. (I'm still learning.)

[2]Did you know that roasted cicadas taste like peanuts? They're highly recommended by experts as a first insect, because they're common and delicious.

[4]What was the anaerobic waste doing there in the first place? That's a much longer story. I may as well just come out and say it, though: Sean spent his weekends helping me fix my mistakes.

[5]Another long story. Luckily, I am not completely exiled. I'm splitting in from CDS and I use my meals on breakfast and late night snacks, so I begin and end my days where I belong.

One last note: because this is a post about family in the broadest sense, I mostly paid short shrift to the people I do have words for: my parents, my biological brothers, my roommate, my best friends. You know who you are.

"Productivity would drop precipitously. We would make joy instead." Griff, your words are my family. I don't know if you've heard it yet, but I've been telling you that with hugs every time I've seen you this year.

I need a word or words to describe you. There are none that encapsulate Griff. Wonderful writer, amazing humanitarian, lover of life in all its forms-- such weak, weak descriptions. My only words, which I have used since the minute I first saw you, that even come close to describing the love and admiration I feel for you every day, are "my peanut". You are that and so much more. The words Wendall Berry were already taken.