What does it mean to know a place? Is it enough to have visited it? To no longer need a map? Can you ever really know a place?

I lived in Santa Elena for 22 days, and I think we made a passing acquaintance. When we arrived, I didn't even know that there was a Santa Elena (a town of 6500, ten times larger than the village of Monteverde for which the region is named). By the time we left, I was critiquing the inaccuracies on the tourist map. 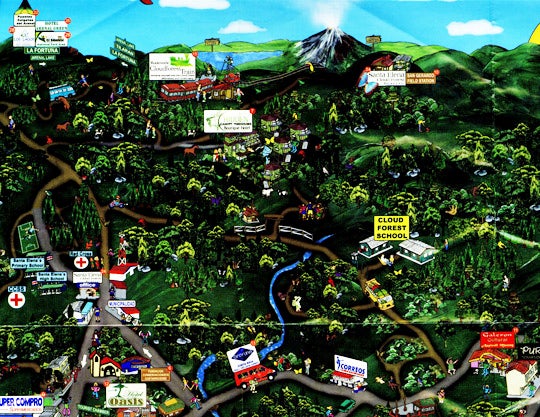 A small section of the map, showing Santa Elena and the Cloud Forest School.

Inaccuracies aside, this map is as good as any, though of course no map could show you Monteverde any more than blue ink could show you the sea. 1 The Cloud Forest School is in the middle, at the top of a (very large) hill. The triangle of streets in the left corner is the heart of Santa Elena, the town to the west of Cloud Forest, where we would stop after school for smoothies, local Monteverde ice cream, and twenty-cent bananas. From Santa Elena, it was only a twenty-minute walk to my house (north, on the winding dirt road). My fellow Obies were farther off the beaten tourist track: they were living in La Cruz, a beautiful district an hour's walk up the mountain. The road to La Cruz is not even shown.

We were comfortably mapless by the second day, but so much more than navigation made me feel at home. My companions and I were doing difficult, fulfilling work as grounds volunteers at the Cloud Forest School, and we were constantly thanked and praised. "Buenísimo!" Eduardo would say as I tamped down the earth around a newly-planted fence post. "Perfecto!" Milton would add.

The Cloud Forest School was founded by local and international families as a bilingual kindergarten. It now teaches 200 students from preschool through 11th grade, focusing on environmental education and bilingualism. Both are practical in this hub of ecotourism, but vital in a changing world.

The small campus and the vast trail network both need constant maintenance; that's where Eduardo and Milton come in. With the help of parents and international volunteers, they build fences, paint rooftops, grade paths, haul gravel, mix concrete, till soil, and patch leaky pipes. For three weeks, during our Winter Term, we helped. 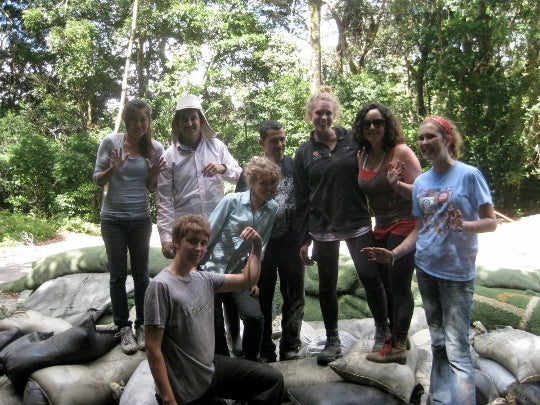 Each day, I would rise around seven and make a breakfast from local eggs and Monteverde cheese. I'd walk to school with my friend Elizabeth, trekking up the the dirt road as the sun burned the mist off the mountains. We'd arrive at nine and read or rest or laugh with our fellow Obies until Eduardo or Milton wandered by. Then we'd grab tools (sometimes ones we knew the words for already, but often we'd have to be shown) and split into groups to do the day's work.

The work was made easier with good conversation. The six of us got close, aided by friendliness, curiosity and Elizabeth's talent for asking good questions. Most of the pictures are of us being silly, like after a long day of dusty work moving concrete bags: 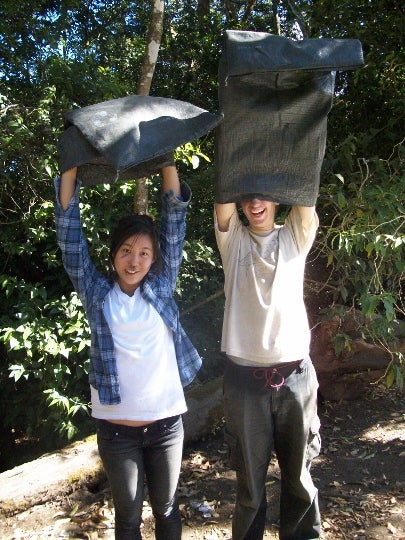 Alex and I are being eaten alive! Help!

Or on a wander in Santa Elena with a papaya named Paul: 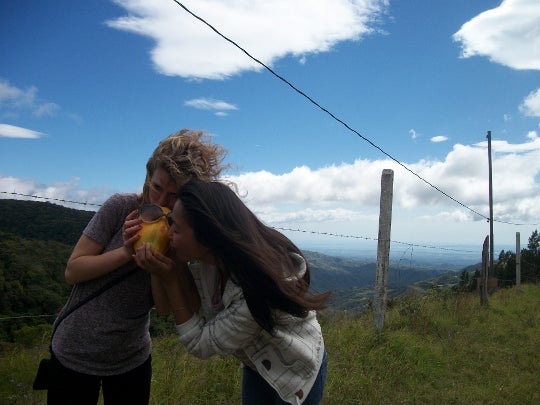 Alex and Margaret pose with the studly papaya in front of a breathtaking view.

But we shared secrets as well as snapshots, and we were homesick together often. Our long days gave us time to talk about anything, in English and halting Spanish. For the most part we enjoyed our work. We also looked forward to our long lunch break; we'd spend it at a small, sunny picnic table, watching kids run and jump like puppies, or gazing out over the mountains as they melted into sky: 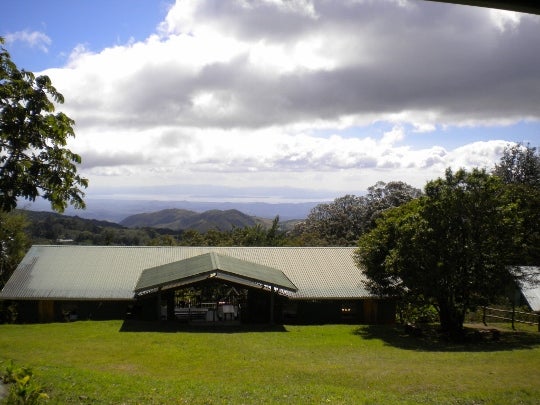 After work the six of us would walk down to Santa Elena for a treat. I bought bananas by the half-dozen, and I'd eat every one on the walk to my house. Once I was home I'd make a snack and write in my journal on the front porch, the pages lit by the waning sun. 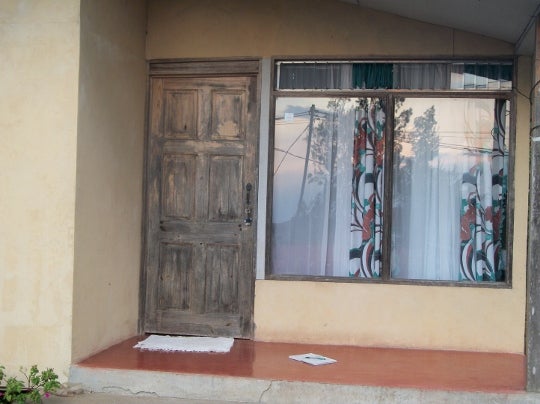 Notice the lack of bars on the window.

When my host mom and brother got home, we'd have dinner, always a variation on the same delicious theme. The silent house would be filled with light and conversation; I would leave the table with a stomach full of rice and a head full of Spanish. Unless Flor and I went down to the pulperia, I would go to bed by nine, listening to the wind howl against the tin roof. The routine suited me; my days in Monteverde were timed to the sun, but defined by good food and conversation.

The ordinary tethered me to the mountains, but the extraordinary, too, made me feel at home: like we were not merely passersby, but witnesses to Monteverde's secrets.
There was the day we followed a handpainted sign down the side of a mountain to a waterfall. In the valley we found a small cataract, nothing like the sign. Pretending to be satisfied, we continued on what we thought was a loop, only to reach the end of the trail in front of a magnificent cliff. The water, which fell at least thirty feet, shimmered with light.

That same week, we took a tour on horseback led by a friend of Milton's. We rode our placid horses down and down and down, into a valley gouged by playful volcanic fingers. The pool at the bottom, fed by hot springs, was merely beautiful -- until we were told that our tour guide had built it by hand. By hand? Pouring concrete, setting stone, on this ledge above the river? At the bottom of a valley, how else? 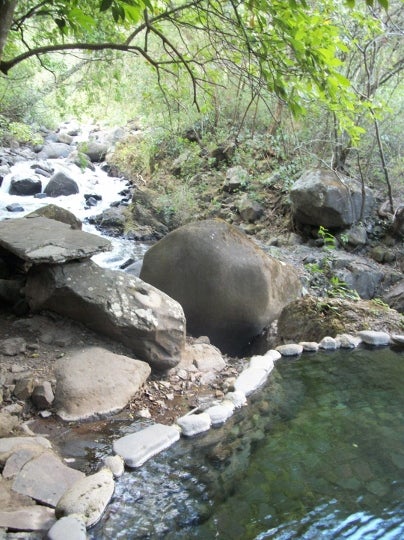 When we towelled off and rode back up into the hills, our guide's wife had prepared tea and pastries for us. Our taxi driver arrived while we were still eating, but instead of packing us up, our hosts invited him to sit and eat. This is Monteverde. Everybody knows everybody. And everybody welcomed us, too.

The pulperia I mentioned above was owned by Flor's best friends. Although I could barely understand their Spanish, I rarely had to, especially with Andreis, Emily's eight-year-old brother. I would be his horse or his motorcycle or his racing companion -- all I had to understand was "Vete!" and "Gané!" Andreis always won. We would play for hours in the sodium light until his family closed the store.

It was towards the end of our trip that we opened a glass door into a cafe and a bird flew into it. It fell to the ground, stunned, and did not resist as I scooped it into my hands. What to do? Staying near would only frighten it. But it was so helpless. I placed it on a branch and backed away. When I came to check on it ten minutes later, it had taken flight. 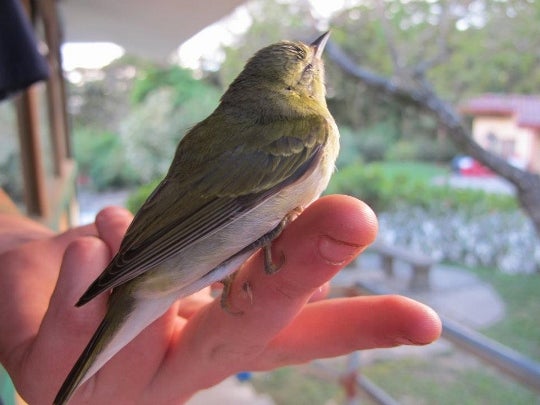 You could fashion a pretty good metaphor out of that, but for me it was enough that it flew.

[1] "Monteverde" is used to refer to the whole region, but Monteverde proper only has about 500 residents. The long road to the east of the CFC is the main road of the village, founded in 1951 by Quakers seeking refuge from the draft. The 20 families became dairy farmers, built the famous Cheese Factory, and set aside land for the Monteverde Cloud Forest reserve, setting in motion the events which have led to the region's reputation as a Mecca of ecotourism.

Griff you are a genius. I love your title, your first paragraph, and your ridiculous face.

Can we hold a contest to see can fashion the best metaphor out of the bird example?

The mere fact that you finally posted this makes me happy. The contents (i.e. your happiness) make me even happier.

another post! it means you live!! just kidding. As always, your writing is poetic and beautiful.
Love,
mom

So that's what you did when you went missing from Branford! Sounds like you had fun and did a lot of good. Thanks for resuming your blog. I'll no longer think that you were abducted by aliens from another dimension.