Practicing is a necessary evil when wanting to get better as a musician. For hours each day we climb up and down scales and arpeggios, wrestle with etudes, and perfect our solos. Practicing (when done right) is a mentally exhausting experience! In order to get the most out of your practicing you need to have the right tools: a thirst for greatness, an inspiring place to work, and the right musical equipment. Luckily for you, Oberlin can provide 2/3 of these needs for you (you're on your own for the self-determination).

Well if I'm going to bang my head against a wall (literally or metaphorically) trying to learn Don Juan, I might as well have something interesting or beautiful to look at! Also, nearly all of the rooms are equipped with Steinway pianos. Let me reiterate that for the piano majors: nearly ALL of the rooms are equipped with STEINWAY pianos! No more practicing on "grandma's cousin's junky piano that's missing 7 keys and shoots flat with every strike." Lastly, we have a LOT of practice rooms, 161 to be exact. And this is only counting the main practice room building. At most music schools it's like the Hunger Games when scouting out a room. Even during "practice rush hour," I've had no problem finding a room. 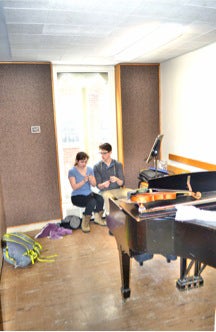 Here is your typical, large practice room in Robertson (building containing all the practice rooms). See, I wasn't kidding about the Steinways! Here we spy a violinist taking a break from her Tchaikovsky concerto to learn the art of scarf knitting. 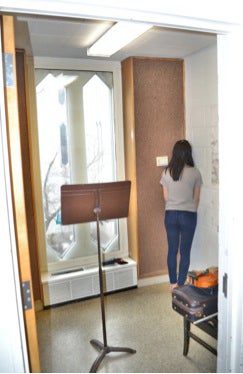 Like a cozier workspace? Well, across from the large rooms are smaller practice rooms that are often equipped with upright pianos. This violinist is striking the ever so popular "If I don't see my etude, then it doesn't exist" pose. 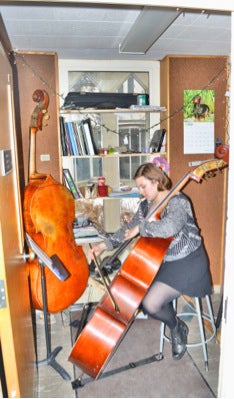 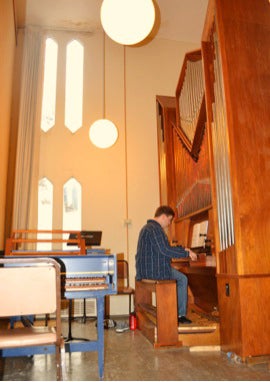 Now some instruments get their own personal rooms. Percussionists, harpists, bassists, organists, and harpsichordists all receive a room to store their instrument and practice. These rooms are often "second dorm rooms" for these musicians: posters, books, radios, and wall lights help make these rooms feel like home. Here we see a bassist hard at work on orchestral excerpts under the soft glow of Christmas lights, while down the hall is an organist "pulling out all the stops" for his upcoming lesson. 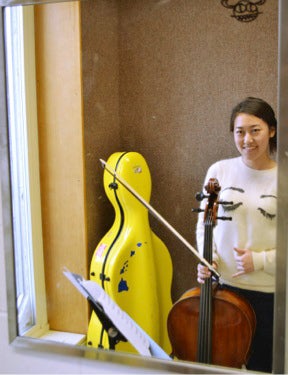 Whether these rooms were meant for keeping an eye on physical technique or as the perfect place for a Snapchat selfie is up for debate. What I am sure about is that these couple rooms can give you many different angles to analyze your technique (or selfie) with its 1-2 large mirrors. In this room, I found a cellist who was kind enough to take a break from her Bach to pose for the camera! 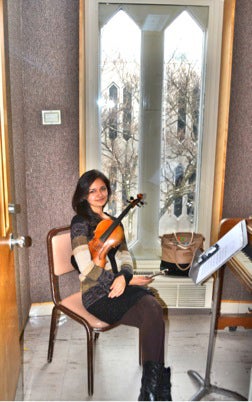 During the winter, these rooms are havens for students who come from states where the temperature doesn't dip below 60°. The heaters in these rooms turn the space into a tropical paradise. Conservatory students know the locations of these rooms by heart and will set land speed records in their attempts to get to them first. In this room, I found a violinist basking in the pseudo-summer temperature on this snowy day. 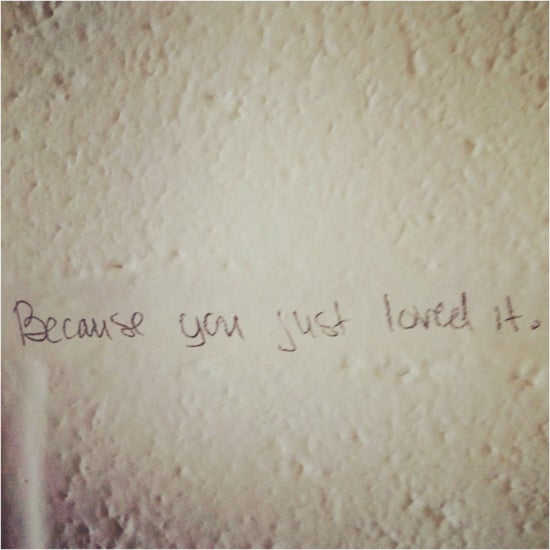 On the day of my college audition, I saw a question that was scribbled on a wall of my practice room: "Do you remember why you wanted to play in the first place?," it read. Directly underneath was this answer (pictured). I cherish this quote and frequently return to it whenever I have a bad lesson or completely botch a studio class performance. Other practice room writings include: doodles, favorite composer surveys, limericks, and practice schedules. Oberlin is full of creative people — if you look in the right places, you may find something that could put a smile on your face! 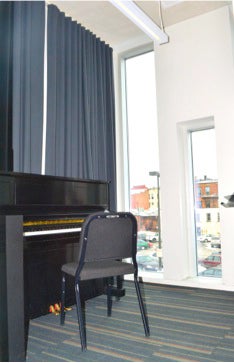 If you're a jazz major or are feeling particularly suave, head on over to Kohl where you can enjoy these modern practice rooms. These rooms have the same general set up as the Robertson rooms; however, there is one major (and awesome) difference. Almost all the rooms at Kohl have self-recording capabilities. This is extremely helpful when making summer festival recordings, a present for the parents, or reviewing your practice. Be sure to bring your fedora and suspenders to help get in the jazzy attitude! 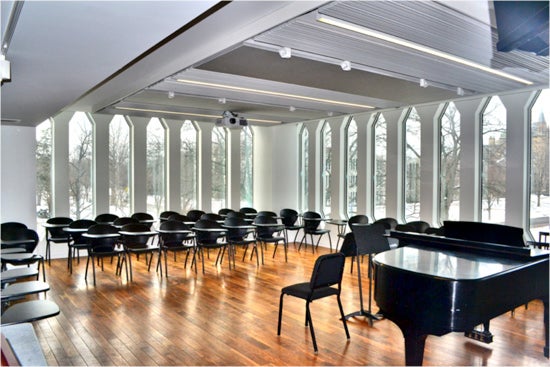 Now you may be asking, "so where do small ensembles rehearse?" Bibbins (the building where students have academic classes and lessons) holds a majority of the small ensemble rehearsal rooms. When classrooms aren't being used, students can easily reserve them online for rehearsal use. Each room is automatically controlled at the push of a button. Shades, projectors, recorders, speakers, and more are all at your command when using one of these rooms.

So there it is: a basic catalogue of the practice rooms at Oberlin! Finding a school with the fanciest concert halls is often a leading category in the school selection processes for most perspective students. Practice rooms, however, are where you're going to be spending a large portion of the day. So, make sure you find a school that has:

Want a hint of where you can find a school that checks all the boxes? Check us out!

Ahahaha "if I can't see my etude it doesn't exist." Too real. Also, I know exactly where that quote is written on the wall, and I've been watching that composer list grow since freshman year. Wall scribblings are such a lovely/terrifying way to ground yourself, either by realizing you haven't gone as bonkers as some people, or by remembering that sanity exists and you deserve some. I hope no one ever tries to repaint the rooms, it'd be a real shame.
I didn't know you could record yourself in Kohl, though, that's nuts! Slash super useful!

I totally agree! Thanks, it's going to be a great time writing- I'm very excited!

As a curious college human, I had no idea there were all these kinds of practice rooms in the con! I knew there were rooms that had big pianos and small pianos and rooms that permanently contain instruments but that was all.

Also, still giggling at "if I don't see my etude it doesn't exist" photo. Too perfect.

I think it's also worth mentioning that all (at least according to the ResEd housing website) of the residence halls on campus have a piano in them. Some extra-special places even have dedicated rooms for those pianos like the cozy little practice space in the new first-year Kahn Hall. These are particularly nice for folks who like to play but may not be majoring in music.

My Capoeira Journey from Brazil to Oberlin

I have a long way to go to become Mestra Beija Flor, but it’s a goal to strive for, to stay light on my feet.

A liberal arts approach to music

Everything You Should Know About the Double Degree Program

Answers to common questions from an alum’s perspective with an admissions twist.