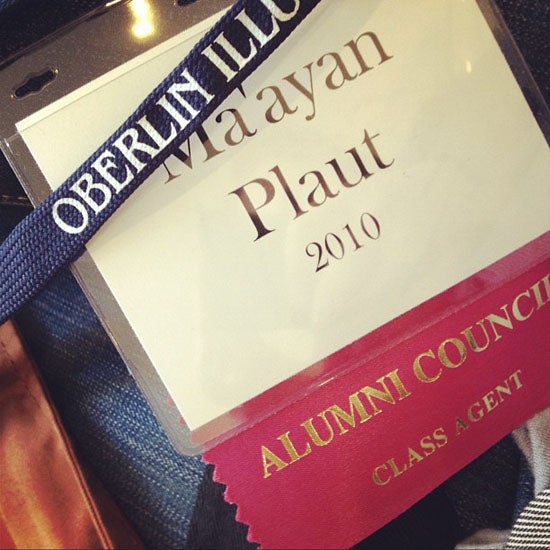 So many officials. This is how I roll.

You see, this year's alumni council weekend was kicked up about 10 notches, because it was the kickoff of Oberlin Illuminate, our seven-year comprehensive campaign to focus on the future of Oberlin. I could say more, but perhaps I should let this video speak first.

Make it full screen, turn your sound up, then come back here. I promise it's worth it.

Feeling all teary and filled with Oberlove yet? I am. I'll be right back. *sniff*

The theme of illumination is underlying in all these pillars, but the theme also has this lovely connection to our campus community. Illumination at Oberlin began with election of President Lincoln in 1860, but from 1903 on, there has been a tradition of illuminating the town and the college at least once a year; at this point, it's one of the most steadfast commencement/reunion weekend traditions. I'm getting just misty thinking about that ethereal beauty that enshrouds Tappan each May. The video showcased Illumination this past year, so you can at least imagine what it's like when all the lights are lit, but really, you have to see it for yourself. Truly, wonderfully beautiful, and my favorite commencement/reunion tradition.

Oberlin's been in the "silent" part of the campaign for three years now, and as is customary, we've fundraised half of our goal before we announced it to the world. Since few folks care just about the numbers associated with a campaign — rather, it's all about the causes behind dollars — in announcing our campaign to the world, Oberlin decided to kick things off with a beautiful weekend showing the best of what we do.

What did we have?

A final reopening of the Apollo. Included in the reopening was a visit from Jonathan Demme and Rhea Perlman, a two-day (free!) film festival, and two midnight screenings. I only was able to make it to the grand rereopening presentation and then the Apollo Outreach Initiative intro and screening, but BOY it was worth it to hear Rhea and Jonathan talk about all our cool things and to see my former students' work on the big Apollo screen. So much love. 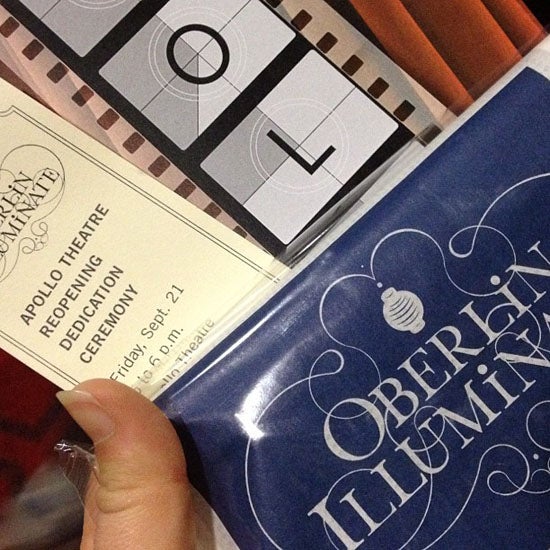 This is my Oberlin Illuminate popcorn from the reopening dedication ceremony. Later, it filled my insides with (en)light(ed) poofy corn!

An ice cream social with Jerry Greenfield '73. So, this was about the coolest thing ever (pun totally intended). After the location got changed and the sudden drop in temperature and impending rain, I was seriously worried about the attendance for this event. It was silly of me to worry, though, because how can you say no to ice cream? And free? And Jerry Greenfield? After a quick crash course in ice cream scooping from Jerry himself (slice off the sides of the cardboard, keep your wrists firm and scoop with your forearm, and while usually Ben & Jerry's has rules about scoop sizing, tonight, there are no rules!), the board of trustees scooped ice cream for all the hungry Obies until everyone got cold and the Oberlin Orchestra started. 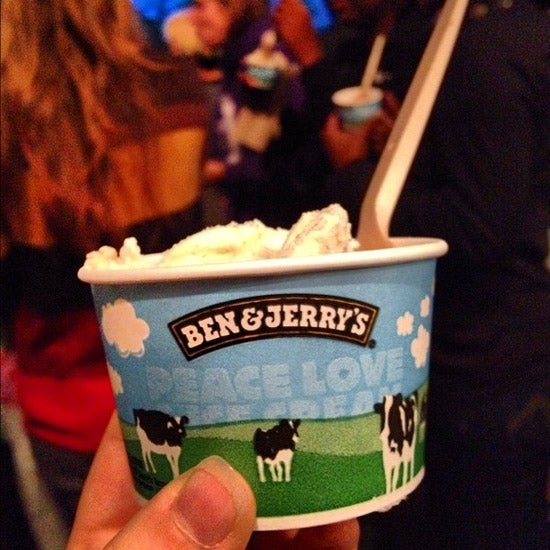 Americone Dream, hand delivered by Jerry and scooped by one of the three awesome class trustees (Ezra '09, Shana '10, or Luke '11... I don't know who was on scooping duty at that moment, but thank you!).

Homecoming. Sadly, this weekend was so full that I was only able to make it to the homecoming tailgate and the first quarter of the football game (which apparently got lightening-ed out then rained out... eep!). There were also alumni swimming and diving meets, soccer, rugby, basketball, softball, and lacrosse games, too. All the sports, all the time! 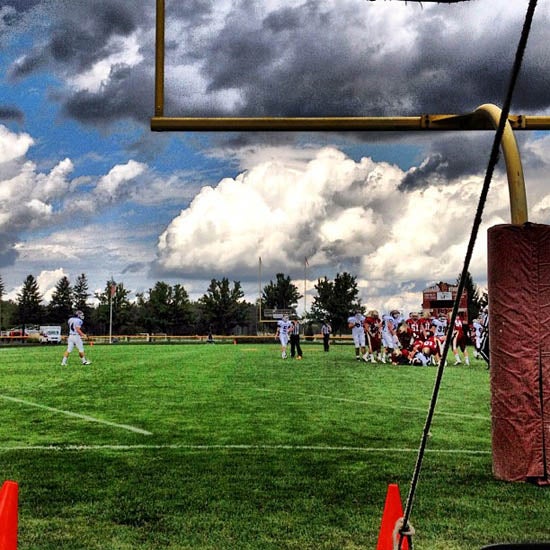 The clouds were super crazy on Saturday. Maybe because it was on-and-off raining the whole weekend... and there was a freak hailstorm at about 3:30pm that day, too.

A series of concerts, talks, and tours for visiting alumni and anyone else who happened to be around. It was all the best parts of commencement, but with so many more students involved. I only made it to a few of these events, but the highlight for me was the Dan Chaon-moderated conversation with alumni authors. James McBride — childhood and grown-up hero, and I'm so lucky that I've met him in person so many times now! — went off on a ten-minute soliloquy about the importance of the Oberlin community supporting the future of Oberlin. I almost cried. That man has such a way with words. Sigh. 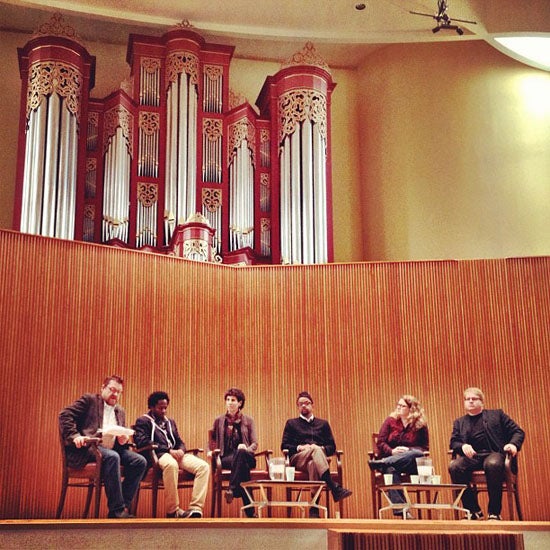 A gala. At first, I was a bit wary of the "get all dressed up and go to a dinner in the transformed field house." I overcame that worry when I found a stunning dress, lost much of my nerve when the freak hailstorm on Saturday morning ruined most of my personal transport plans, but it all worked out. 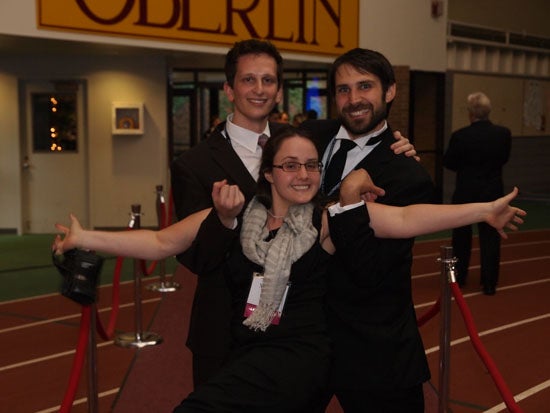 A troublemaking trio. Video maker extraordinaire Daniel Schloss '07 on my left, class trustee Ezra Spier '09 on my right. They're actually picking me up, but you can't see that. Photo by Dale Preston '83. 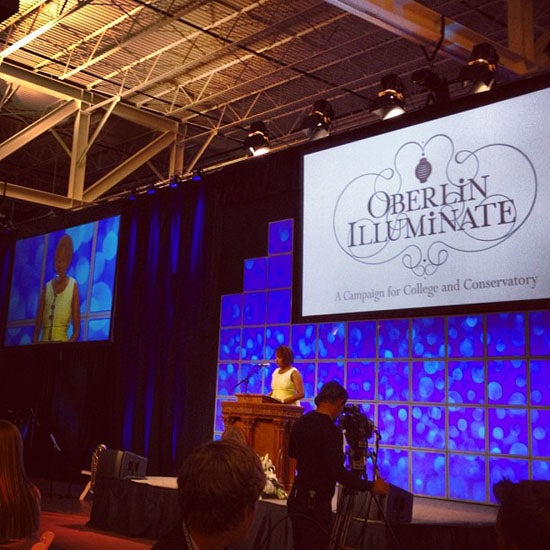 I legit felt like I was at the Academy Awards. I can get behind this dressed-up dinner, I think.

The dinner was a lovely mix of pretty dresses and heart-felt (but real, solid, beautiful, and honest speeches — including one from my senior class president/class trustee Shana!) stories and that epic video showcased above. The highlight for me, though, was being seated at the same table as one of my creative heroes, Josh Neufeld '89. I swallowed every ounce of silent adoration I had and dove straight into talking about the terrifying and gratifying creative process. Josh, if you're reading this, I'm so sorry if I was overwhelming. You are just really cool and I'm really really happy I got to meet you in person.

A freaking awesome concert. By the Punch Brothers, no less! If you've never heard them before, stop everything and listen to this.

Are your ears happy yet? Mine are dancing! And did you know that the guitarist Chris "Critter" Eldridge is a 2004 grad? And that they all came to the Feve afterwards and we all swooned? Yeah, that happened. 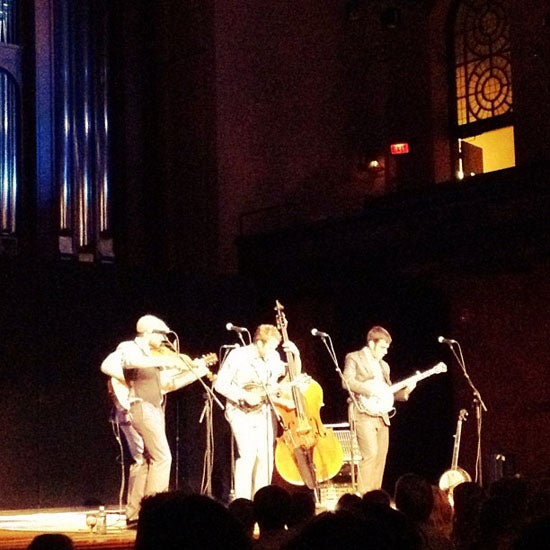 Sunday, when everyone was recuperating from a weekend of never-ending Oberlin awesome, I was a part of the council meeting where we conducted all of our official business in a few hours. It was a nice outro to the weekend, and then I collapsed on the couches in Slow Train with some fellow visiting alums for nearly four hours, had a delicious dinner, then fell into bed at 10pm.

Verdict: weekend - win; Oberlin - double win; campaign - triple win. If you'd like to learn more about it, do visit the super sweet site and read more about what we're doing here together.

The storm that weekend was crazy! (Made for some good shots from the women's soccer game, though!)

We should have more weekends like this. Except for maybe a few less awesome events (or a cloned body) so I can go to everything!

PUNCH BROTHERS holy cow. That was the cleanest live sound I have ever heard, ever. Impeccable. I can't even.

Also you linked to my post, eee! Fun fact: sometimes I still fangirl about you. I'm so glad/honored we're friends.

@Sela - On either side of the rain, it was a really gorgeous weekend. And while it was great that so much was going on, I had so much guilt about not being able to time-turn. #oberlinproblems