I'm back! After dealing with the craziness of add/drop, moving in, and driving across the country with my boyfriend to get back to school, it's nice to be settled back into a routine, or at least the crazy, over-scheduled routine that is common for Oberlin students. Coming to Oberlin this time was much different than moving in as a first-year - I had no family members here to help me unpack, I had only two days (instead of all of Orientation) to put my stuff away, and now that I am no longer a baby-faced first-year, I'm expected to know what's going on. With my belongings (still) spread across the floor of my dorm room and my baby face very much intact, I'm still waiting for the mandatory bonding activities to begin.

The other day, Ma'ayan Plaut, blogger extraordinaire and the driving force behind the Oberlin Blogs (in addition to many other things), sent me an email with a few basic questions, and told me I was free to answer them in a blog post if the inspiration struck. After deleting multiple drafts of blog posts about the start of the semester, I decided answering the questions as a blog post might not be a bad idea, and would certainly be more fun than working on another draft that wouldn't make the cut. Without any further introduction, those questions were:

What was the best thing that happened in the past two weeks?

The best thing that happened in the last two(ish) weeks was making it successfully to Oberlin. My boyfriend and I drove back to school from San Francisco, a journey that everyone warned would be the test of our relationship (for the record, we made it). If you were curious about our exact route, you can follow along with the nifty little map below!


While our five days of driving were an amazing way to end the summer, after eating roadside food and not bathing for several days, returning to a life of co-op food and Harkness group showers has been wonderful, and made me realize how much I missed Oberlin and the friends I made here over the summer.

What was the worst thing that happened in the past two weeks?

The worst thing that has happened in the last two weeks has been having to buy textbooks. After working all summer and diligently saving money, watching it disappear on textbooks (instead of coffee) has been very sad. While nearly all college students can relate to the pain that is purchasing textbooks, there are some great options besides buying textbooks new (or going to the bookstore). Besides the obvious online retailers, SWAP, the Oberlin book co-op is an awesome resource, and while they had none of my textbooks this semester, I was able to avoid spending any money on textbooks last semester.

What's the funniest thing that happened in the past two weeks?

Quick backstory: Right before I left to go to school, my family got baby goats. The goats are hilarious, and unfortunately I only got to spend about a week with them before I had to head back to school. The goats have to be fed two times a day with a bottle, and LOVE feeding time. This is Violet (my favorite of the goats) being fed by my mom the other day. 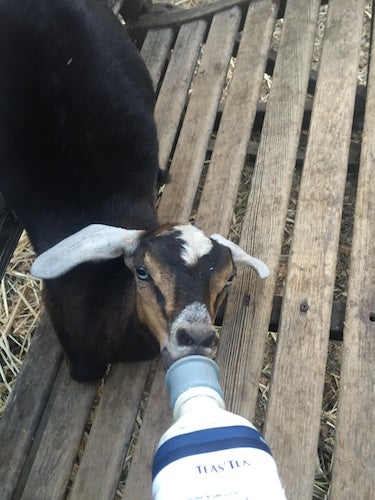 In addition to our three goats, nine chickens, three cats, and four other dogs, we also have a very old pug, Magnus, who resembles a cross between a loaf of bread and a raisin (see below): 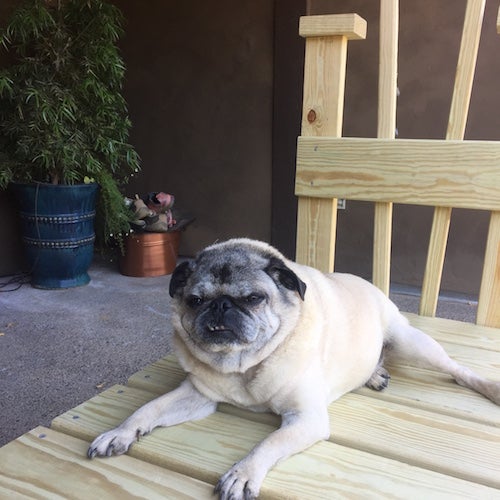 After years of being a semi-successful pug, Magnus has found his true calling as a goat. He now insists on coming into the pen when they're being fed, and after a few days of his barking, my mom capitulated and has started to let him drink out of the bottle as well. While the humor may be lost on readers who aren't personally familiar with any curmudgeonly pugs, this photo has made me crack up at least once a day. 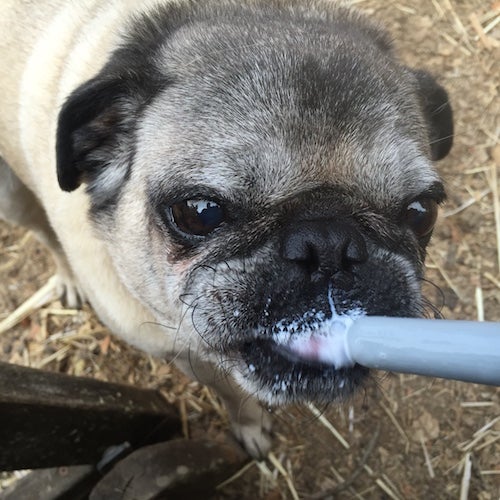 What did you learn in the past two weeks?

There are too many things to write about them all individually, or to just pick one, but a few of the most valuable lessons are:
1. You can get pulled over for doing 77mph in a 70 in Illinois
2. As much as I love theater and economics, I like my schedule more when I'm taking classes that aren't just in those departments
3. Color-coding my calendar is the only way I can get anything done
4. Free food tastes better
5. It is really easy to accidentally eat 1lb. of marshmallows, especially when driving
6. Having classes at 9am doesn't mean you'll go to bed earlier, it just means that you'll sleep less (and be exhausted all the time)
7. Just because you live with someone doesn't mean you'll see more of them
8. Using the slang from the ABC Family comedy "Greek" is the fastest way to make friends in college

While those questions hopefully gave you a quick glimpse into my life over the past couple weeks, I'm so excited to be back and blogging again, and can't wait to blog more this year! Now that I'm significantly more mature, and slightly less baby-faced (unfortunately, neither of those is true), I'm ready to take on my second year.

Somehow I managed to go four years without going to one of the most famous amusement parks in the country.

Looking Back on My First Year

My college experience memorialized and categorized in a series of bizarre, heartwarming, tender, and raucous memories.