I really love requiems, or "masses for the dead," as they are commonly known. It's unfortunate that this particular form is appropriate right now, but hey, it's beautiful music! Here's Mozart's Requiem because A) The Musical Union, College Choir, and the Oberlin Arts and Sciences Orchestra will be performing it on December 7th (!) and B) Frederick deserves no less. Listen all the way through for myriad tantalizing musical niblets! Highlights are the Dias irae, Confutatis, and Lacrymosa.

I brought a friend to his demise. Yes, it's true. I know, I'm a monster.

I thought it would be easy for him to find a way to succeed in the fertile Oberlin environment. I thought he could keep me company through the long hours of studying and reading and would be aesthetically pleasing all the while. He was a quiet companion and didn't ask for much except modest hydration and some mild artistic cultivation; he didn't even need to be outside at all. I thought he would flourish here, among the mixed foliage and dappled sunlight. How wrong I was.

Frederick, you squat, stolid, glorious little Ficus microcarpa. In your miniature pot you sat, day after day, hoping for sunlight that would never come through the devious arrangement of Barrows' eternally shaded windows! You were so patient even as your emerald leaves fell one by one upon my library books, though you and I both knew that Ohio would offer even less golden diurnal riches as the year wore on. Despite your ailing, you always breathed life into the room. Was I selfish in thinking that we could provide each other solace in this grand collegiate adventure? Oh Frederick, forgive me!

My little bonsai, it grieves me to be parted. Your memory lingers in my sunless, barren room. It is all I can do to hope that from your bulbous trunk you will be miraculously revived since I left you in slightly sunnier pastures during fall break. It would be more than I deserve after wronging you so. Or, perhaps, there were more alternatives to a slow, sad decline: a future as a lounge plant, watching the comings and goings of various Obies? A bringer of joy and a slight increase of oxygen to a greater number? Maybe even a life nestled in some verdant corner of the Science Center or a residency in the greenhouse would be possible. Anything, if my Frederick could come back to me!

Friends, Obies, and countrymen: do not make the mistake that I did. Unless you have firm plans to reside in a domicile bathed in sunlight, leave your horticultural companions at home. It is a kindness to all souls involved. 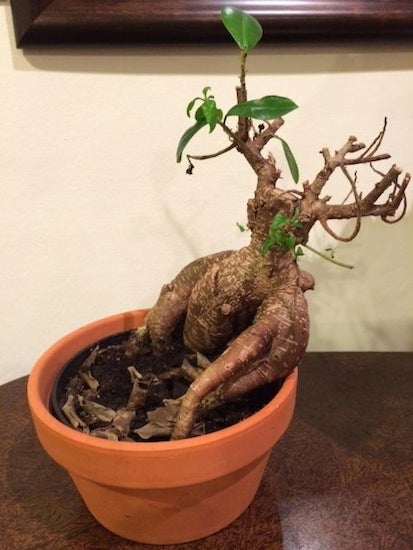 The dear fellow seen at home during Thanksgiving Break after a few weeks of recovery. All is not lost!

About the music: This piece came about as a commission put anonymously to Wolfgang Amadeus Mozart (who had an awesome name) by the eccentric Count Franz von Walsegg (who also had an awesome name), an individual who was well-known for commissioning works from composers and subsequently passing them off as his own (the "Walsegg Requiem" doesn't quite have the same ring to it).

Interestingly enough, this famous Motzartean work is only composed in part by the master; he died midway through writing it and left only a couple complete movements and a few unfinished sketches. His pupil/colleague Sussmayer finished it off and made it the piece we know and love today.