A one-day virtual summit about the interactions between world mythology, literature, art, and the environment. Visit the Oberlin World Mythologies Conference website for complete details. 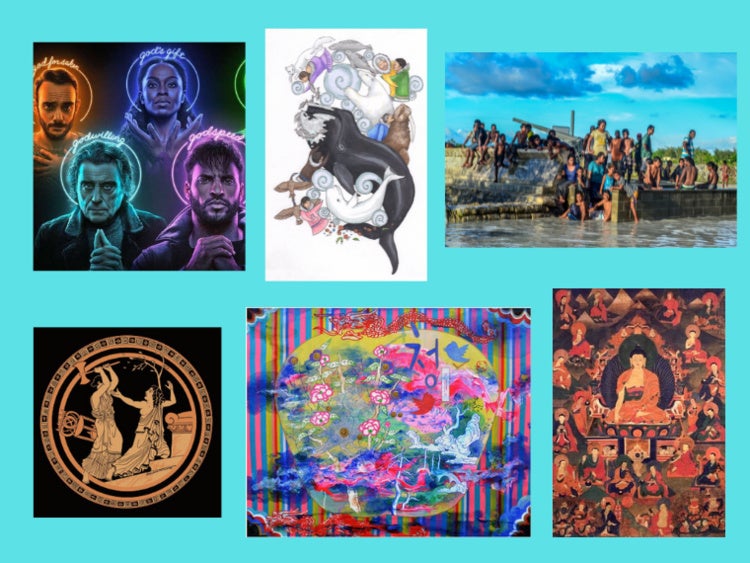 The comparative study of mythology has been a fruitful angle for anthropological, historical, and literary analysis. Our conference features presentations that both interrogate and update the study of mythology to speak to current concerns. By having time for questions and discussion after each panel and placing these papers in dialogue with one another, we hope to encourage the audience to make connections in thought, belief, and representation between these varied traditions.

(All times are in EDT)

The first panel takes up the study of Greek myth to show its ideological and imperial use (Christopher Trinacty, Oberlin College, on myths of Aegina) as well as how it can be employed to convince a jury in the law courts of Athens (Naomi Campa, University of Texas - Austin)

Indigenous peoples are coping with global climate change and the second panel showcases how the Iñupiat of Arctic Alaska utilize storytelling to maintain a connectivity to their local traditions (Chie Sakakibara, Oberlin College) and how Native Pacific islanders try to balance hope for the future with the reality of today in their stories (Mike Roman, University of Cincinnati).

Video by the students of CLAS 210 (Classical Mythology) about the Allen Art Museum at Oberlin College.

Video by Kevin Greenwood about dragons in Asian art.

Our final panel looks into the evolving identities of the Great Arhats, a group of important Buddhist deities in East Asia and Tibet (Kevin Greenwood, Oberlin College) and the contemporary art of Jiha Moon (Artist), who incorporates imagery and iconography from traditional East Asian mythology.