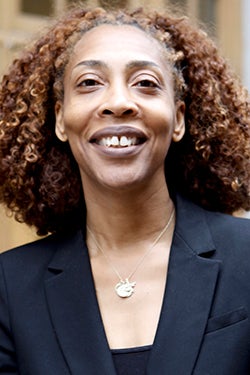 What attracted you to Oberlin?
Initially, I was drawn to Oberlin’s legacy as an educational and ethical leader in the admission of African Americans and women. Relatedly, I was captivated by the ongoing commitment among the student body to social justice. As I investigated further, I was impressed by the accessibility of the faculty and the high proportion of graduates who went on to complete the Ph.D. With my interest intensifying, I took a Trailways bus from Chicago to Cleveland on Halloween weekend and then made my way to the airport where I caught the shuttle to Oberlin. Somehow, I ended up with access to an empty room in Asia House and, from this home base, I attempted to explore as much of Oberlin as I could. I came away completely enamored of the openness and curiosity, the conviction and the creativity of the individuals whom I encountered. There was seriousness of purpose complemented by utter whimsy that left me exceedingly eager to join the Oberlin community. After my visit, I applied Early Decision with the greatest enthusiasm and, happily, the letter that I opened in my bathroom some weeks later was one of congratulations.

Service on the Oberlin College Board of Trustees represents a significant commitment of time and effort. What draws you to this service?
First and foremost, I remain very connected and committed to Oberlin. I can honestly say that my time at Oberlin was life changing. I met my husband and my closest friends during those four years and I continue to find community among these individuals. Accessible and generous, my professors challenged and nurtured me throughout my time at the College, inspiring me to both to pursue a career in education and to continue my studies in graduate school.

I also appreciated the diversity of thought and experience that I encountered at Oberlin. I became friends with students from distinct backgrounds with identities similar to and quite different from my own. While political discourse was not as polarized as it appears to be in our society today, there was significant divergence in perspective around issues of race, class, gender, and sexuality during my time at Oberlin. The conversations that emerged within this context were not always easy but they were invigorating and fulfilling.

These experiences inform my belief that Oberlin is an exceptional educational institution deserving of the support and challenge that concerned alumni can provide. Having been a member of the President’s Advisory Council and having served a term on the Board of Trustees, I have learned quite a bit more about Oberlin’s strengths as well as the challenges that the school must meet. I would be honored to contribute
to the ongoing journey of the College and the Conservatory via continued Board service.

Share an Oberlin experience that shaped who you are today.
Early in my time at Oberlin I was invited, without much warning, to speak at a large gathering that was a symposium on pluralism. I had a bit of trepidation about giving the speech to a crowd but I was mostly excited at the prospect of sharing my thoughts and beliefs on a topic about which I was developing a nascent theory and practice. I was thrilled and gratified to learn that my extemporaneous comments were well received by my audience. In the immediate aftermath of this event, I understood myself to be a person equipped to challenge my peers while also building bridges between individuals and communities. I was able to articulate a compelling vision and to help my audience to think about the ways in which they might make this vision manifest. On an almost daily basis, in one-on-one settings and before large groups, via prepared remarks and at a moment’s notice, I am called to communicate in this manner and this has helped to shape both my personal and professional identities.

What elements of your personal and professional life would be helpful to you in your service as a trustee?
I believe that my 30-plus years of service as an educator, including decades of work in the independent secondary school sector, offer valuable insight into the experiences and expectations of students and families who look to Oberlin and its peers as they consider higher education. A long-tenured administrator and, now, Head of School, I am very familiar with best practices in shared governance and have devoted my career to facilitating collaboration among all constituencies--students, faculty, staff, administration, and parents--in demanding and innovative educational institutions. I am a good listener, communicator, and collaborator. Additionally, I am happily enmeshed in a supportive, multifaceted, and often hilarious web of Oberlin friends and family.

What about Oberlin resonates with you today?
There are numerous aspects of Oberlin that resonate with me today. I value the faculty’s commitment not only to the production of scholarship but also to the nurture of young scholars. I also appreciate the intersection of scholarship and activism that are evident among faculty and students alike. As a parent of serious dancers, I have developed greater understanding of and appreciation for the rigors of an arts education and, particularly, of a dual arts-liberal arts experience. Finally, I find compelling the school’s articulated desire to promote broader access to students for whom an Oberlin education is essentially out of financial reach. The school faces obstacles in terms of reaching this goal but its legacy insists that we rigorously engage these challenges.

Tell of one specific instance in which you wished to understand someone with different values from yours. What happened?
This question calls to mind a scenario that unfolded during my first year as a teacher. I found myself in a situation where I wanted to understand my student’s values but, in truth, I also wanted to change his mind. The challenge was that I wanted to impact his thinking through open and honest discourse without seeming to use my authority simply to force him into compliance with my position. During that first year, I had my 8th grade students write in their journals at the start of each class and, periodically, I allowed members of the class to read their work aloud. During this time, Brian Boitano had come to prominence as a figure skater on the US Olympic team. One day, one of my students volunteered to read his work and began narrating a homophobic tale that included a sterotypical hair stylist who was the subject of ridicule. There were also a reference in class to a Brian Girl-tano.

While I interrupted the reading, I realized that simply shutting this student down would neither help him to process the thinking that informed his story nor would it help him to understand why his work was hurtful and inappropriate. I felt that I had a responsibility to him and to the other students. Because this situation unfolded in class, I needed to facilitate group conversations that would neither ostracize the author nor allow his story to stand as acceptable. I had a significant task before me; at the start, the author held fast to the notion that his attempt at humor was legitimate. Additionally, he offered that his parents thought that the Girl-tano bit was hilarious. In an effort to explain why I did not allow the story to continue unchallenged, I talked with the class about honesty in the creation of art and the difference between laughing at and with a character.

I asked the author to really consider whether he had drawn the hair stylist with integrity or whether he was merely a vehicle through which to make fun of Brian Boitano and gay people more broadly. I also let my student know that I was following my conscience as a teacher and that I wanted to be sure that he followed his as a student, even if he ultimately did not agree with me. After what felt like several days of conversation, my student subsequently took me aside to say that, in fact, he had intended to make fun of his character and of Boitano and that he no longer wanted to advocate for that particular story. I really felt the power of teaching that day. I was grateful that my instincts had led me to do the harder job of trying to understand and to be understood rather than attempting to simply end the situation by silencing the child. Our little class had a good year together and, many years later, I learned that the student who had authored the story had taken a path similar to figure skating. He had become a dancer, which touched me deeply.

What do you spend your time working on and thinking about?
I spend my time working on the long term and day-to-day challenges and opportunities that my school faces. I am often thinking, planning, and presenting on questions like how best to address affordability as we set tuition and allocate financial aid. I consistently interrogate our academic and co-curricular programs wanting them to be innovative, relevant, and informed by our mission to promote critical, ethical, and global thinking. I join in the work of building capacity and distributing responsibility for ensuring that diversity, equity, and inclusion inform our policies and practices. Finally, I think about how to promote professional and personal growth not only for students but also among my colleagues.

What else do you want your fellow alumni to know about you as they consider how they will vote?
I have been a proud member of the Oberlin College community since I arrived on campus in 1983. Over the past decade, I have sought to support this vibrant and inspiring institution through my service on both the President’s Advisory Council and the Board of Trustees. In this work, I have attempted to keep my eyes trained on Oberlin’s legacy and also focused on its future.  It would be an honor to serve another term as an Alumni-Elected Trustee.